12-Year-Old Boy Is Recovering After His “Friends” Set Him On Fire : AWM 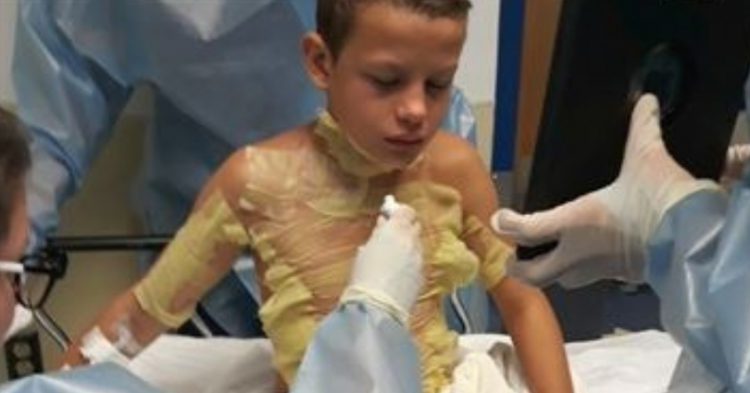 When a twelve-year-old boy was hanging out with his friends, the group decided to do something bizarre. They set the boy on fire and crossed their fingers that they would become internet famous. The group of prepubescent youths had high hopes for the new The Fire Challenge, which is an internet challenge kind of like the Tide Pod Challenge, which encouraged people to eat the laundry detergent pods and film themselves doing it.

Because the youths of today are desperate to be noticed and to be spoken about in circles of friends and on the internet, they’re willing to self-immolate in the hopes that they’ll achieve that notoriety. The Fire Challenge is the latest stunt young children are participating in with the hopes of becoming internet famous. But this challenge is just as dangerous as it sounds, as one mother from Michigan, Tabitha Cleary, is willing to say. Her son suffered second-degree burns when he was sprayed with nail polish remover and then set on fire. The boy, Jason, was eager to rise to fame and was willing to take the quickest route possible – by having his friends light him up like a torch and film the atrocity for their social media pages.

The incident took place at one of Jason’s friend’s houses and left the boy hospitalized for half a week. After medical treatment for four days, Jason was allowed to return home where he realized that the stunt had done nothing for his status except make him and his friends look like attention-starved fools.

Apparently, this was not the first time that Jason and his friends had participated in the Fire Challenge. The first time they did it, the fire did not get big enough to cause harm. They were able to put it out before it left lasting burns on the flesh. However, this time they were too slow, and Jason was left with severe burns across his arms and torso, which may leave permanent scarring on his body.

These Michigan kids were not even engaging in a hot, new trend. They were years behind the curve when it came to be cooling, as the Fire Challenge first appeared on the scene back in 2010. The University of Iowa Injury Prevention Research Center made not of the Fire Challenge years ago. This Fire Challenge is similar to other online pranks and challenges, including those that use boiling water to scald the skin.

In 2016, a boy from Queens, New York, was burned badly when he tried to be cool. The youth sprayed himself with rubbing alcohol and then set himself on fire while filming the atrocity for his social media profile. Another child from Detroit, a 12-year-old girl, spent two months in the hospital following another mistake when she experienced second- and third-degree burns following a failed attempt at a similar dangerous internet challenge.

If children are not careful, they can be hurt very badly by participating in these internet challenges. They desperately want to be noticed and to be famous.