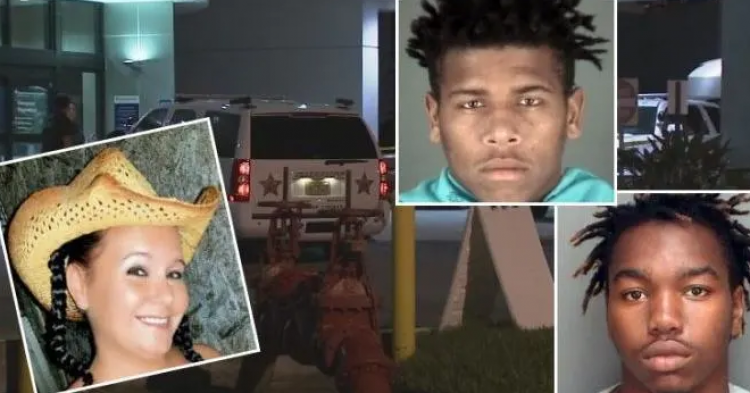 Louise Ornduff and her son Kalaeb pulled into the Bank of America parking lot ahead of the scheduled time. They were planning to meet two men to discuss the sale of their Nissan Rogue. Kalaeb was behind the wheel, and his mother was in the vehicle with him. However, the Clearwater, Florida woman and her son were surprised when the men who they thought were trying to buy the Nissan attempted to steal it instead.

The two carjackers, 18-year-old Lasupta Singletary and 17-year-old Jernalen Dreshaw Coleman were waiting for the victims to arrive. They were armed and prepared to steal the vehicle and demanded the keys as soon as Kalaeb drove up into the Bank of America parking lot. Because the carjackers were armed and dangerous, Kalaeb handed over the keys because he wasn’t trying to risk his life over a Nissan Rouge.

As the suspects drove away with the stolen car, Ornduff drew her weapon and fired a single shot. The bullet just so happened to strike Singleton. Coleman continued to drive away from the scene of the carjacking while his accomplice died in the seat next to him. Coleman drove to a hospital where he dropped off 18-year-old Singleton, who was pronounced dead.

Police wanted to investigate the teen’s death and soon found that the two were involved in the carjacking in the bank parking lot.

“What they’ll be doing is looking at surveillance videos, talking to witnesses to see when that shot was fired, how far the vehicle was when the shot was fired to determine if self-defense is actually a valid defense here,” criminal defense attorney Anthony Rickman, who was not involved in the case, told WTVT.

Once the police learned that Singleton had died as a result of the armed carjacking, they charged his accomplice, Coleman, with second-degree murder and armed robbery. Coleman was slapped with the murder charge because Singleton died while committing a felony.

“Based on their history, which you can see before you, and the fact they were engaged in an armed robbery, leads something to…to their character, I would say,” Clearwater PD Deputy Chief Eric Gandy told WFTS.

Facebook users commented about the case. Many people thought Ornduff was right to fire a shot at the fleeing carjackers.

“She was right in what she did and had to, I would have done the same thing had I been in her shoes, and the police and courts should back her up and not take the defense of these criminals, help the police clean up the streets against crime,” one reader commented on Facebook.

“Everyone knows that the relatives of those two will say that they were good boys. They will probably say that they needed to steal the car to sell it to afford to live. Just wait until the b.s. starts people. I personally think that they both got what they deserved. Too bad for them,” another wrote.

What do you think about the outcome of his carjacking?