A Little Girl Was Having Fun With Chalk On The Sidewalk, But Then A Neighbor Got The Hose 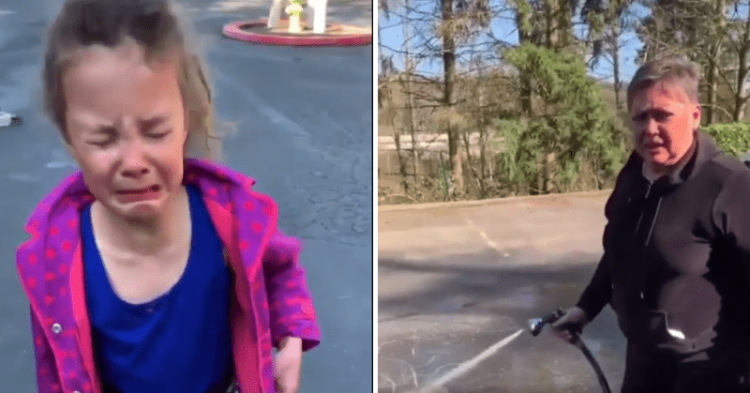 Some people love to make others suffer. But few appear as cruel as so-called “Sidewalk Susan,” who was captured on video spraying down a little girl’s sidewalk chalk art while the child breaks down in tears. Although this event is very meanspirited, the girl and her mother claim to have been the repeated victim of Sidewalk Susan, who tries to claim ownership over things that simply do not belong to her and tell other people how to live their lives.

Footage shows the moment this neighbor decides to harass a little girl and her mother. And the mother admitted in the comments of her original post that this neighbor has her sights set on making life difficult for her and her daughter. But she claims to not know why.

After posting the images and emotional breakdown of her little girl on the internet, she was inundated with support from people across the internet. Many people urged the mother to press charges against the neighbor if the harassment continued.

“Thank you guys for your kind words and support. This lady has some issues with us. Yesterday, the neighbor kid was out there drawing with chalk, and she stayed inside. She messed with the wrong family. And today, she yelled at my daughter to shut up while she was playing outside.”

The mother added, “I try really hard to keep a cool head, especially with my child around. But today, this salty, condo board b*tch left notices on peole’s door banning the kids from using the empty f**king parking lot. Then I see her recording/taking pictures of me when I went to offer the neighbors some food bars and water because they’re locked out. I try to compose myself when my kid is around but (my daughter) wasn’t with me and I cussed her b*tch a*s out as she ran back inside her apartment. I’m done with this lady.”

Other people agree. They feel that while the chalk drawings might not deserve a place in the art museum, they can bring a smile to people’s faces, especially during our stressful modern times.

People on Reddit shared their thoughts about the harassment.

“My neighbor’s kids like to make chalk drawings for people on their driveways (like drawing their car/plants/house/family or outlining its shadow), and I don’t think anyone has ever gone and purposefully erased it. It’s chalk! Who cares about chalk?”

“It’s CHALK. How miserable do you have to be to be genuinely offended or bothered by chalk art? This little girl doesn’t get to hang out with her friends at school or go play on a playground. She’s confused and sad and doesn’t fully comprehend what is going on in the world. She needs a break! All these people saying she’s vandalizing are the same folks who say kids spend too much time inside looking at screens. Again, it’s chalk. It washes off.”

How do you feel about this condo board woman washing off the little girl’s chalk art with the hose? Was that necessary, or was it harassment?