A Stranger Ran Up And Attacked Him, But He Didn’t Know He Owned A Gun : AWM

A Stranger Ran Up And Attacked Him, But He Didn’t Know He Owned A Gun 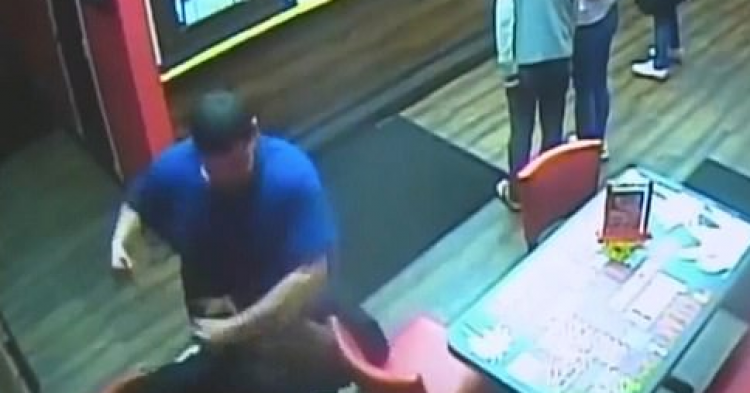 While a man is minding his own business eating a handful of fries at a Miami restaurant, a stranger comes up to him and attacks. The diner was taken aback by the sudden, unprovoked attack and his beaten severely. However, the attacked man returns to the restaurant with a firearm and shoots at the attacker just moments later – and the entire escapade is caught on the restaurant’s security cameras.

The restaurant where the violence occurred was The Licking restaurant in North Miami. The incident occurred on Tuesday evening at around 6:30 pm. 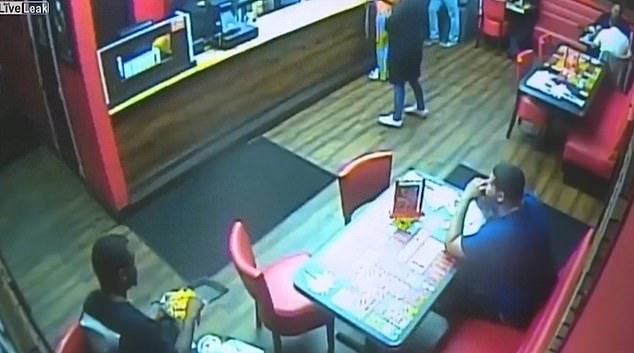 In the video, 21-year-old Tamario Rolle is seen eating in the corner. He’s seated at a table on the far-left side of the video with a box of fries. He’s stuffing his face when he glances over and sees a takeout customer, 24-year-old Henry Poumier-Cristo.

However, things quickly escalate. Poumier-Cristo, who is wearing blue and seated at another table, rises to his feet, prepared to attack. And he does. He rushes toward Rolle and punches the diner in the head, over and over again.

Until the moment of the assault, Rolle had been seated. But as the fists come flying at him, he rises but fails. Poumier-Cristo holds the victim in a sort of headlock as he continues to waylay upon him like a punching bag. 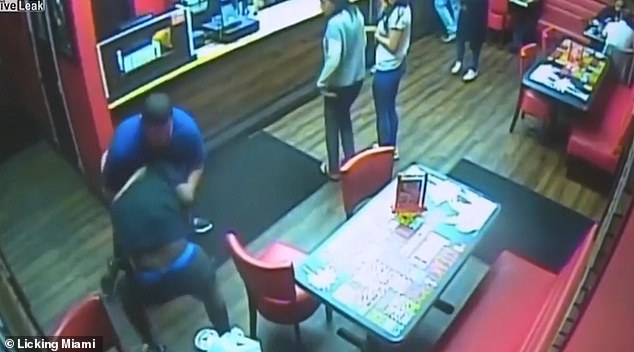 Eventually, Rolle frees himself and runs past Poumier-Cristo. While off-screen for a few moments, Rolle apparently arms himself with a firearm because he returns to the CCTV range with a Glock handgun in his fist. Allegedly, he had pulled the gun from his waistband.

Realizing that he is outmatched, Poumier-Cristo halts his attack and then turns around. In moments, he’s running for the exit, trying to save his own skin. 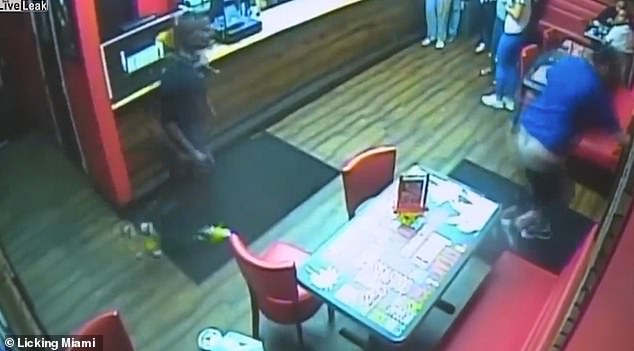 When Poumier-Cristo reaches the road – Rolle wanted to give the attacker a head start – Rolle opens fire and sends seven bullets chasing after the man. His victim is only about ten feet away as he discharges the bullets into his fleeing body. In the video, organ blasts of gunpowder are visible.

Then Rolle turns back into the restaurant and grabs his fries.

Different angles show that Poumier-Cristo was struck four times in the right leg. He drops to the ground in suffering as his attacker returns to munch on his grub. 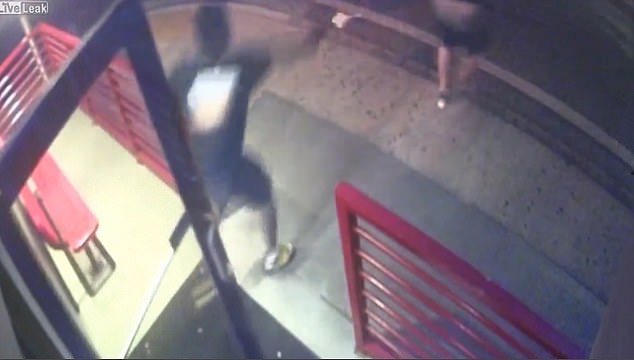 The gunshot victim was taken to the Jackson Memorial Hospital’s Ryder Trauma Center by the responding Miami-Dade Fire Rescue team. He is listed in stable condition.

Rolle has been detained and is cooperating with investigators. Rolle claims the attack was unprovoked.

North Miami Police Officer Natalie Buissereth said, “What we have here is a victim who turns into an aggressor and an aggressor who becomes a victim… From what we know, these two men did not know each other. They were strangers to each other.”