AOC Is Furious With Nancy Pelosi After She Didn’t Stand Up To Trump : AWM 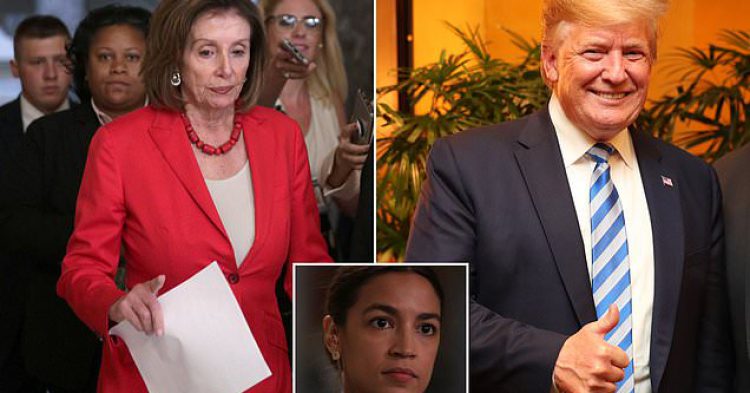 When the Trump-backed border control bill came back to the House after being modified in the Senate, House Speaker Nancy Pelosi changed her tune. After standing before her colleagues and proudly proclaiming how she would fight Trump’s border bill like “a lioness,” the Speaker caved and gave in, passing the bill in quick order. The submission sparked fury in young upstart congresswoman Alexandria Ocasio-Cortez, who wanted to fight Trump’s initiatives tooth and nail no matter what.

The reason Pelosi folded and allowed the border bill to pass through Congress as the government hands out $4.6 billion to the struggling border agencies was that the bill included humanitarian efforts to help the dying children that federal agents have stripped from their parents and thrown into cages like animals. 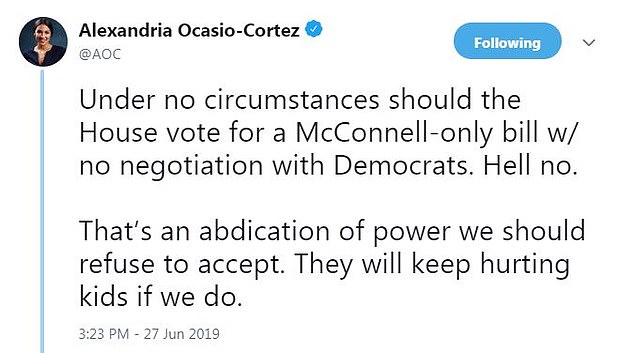 “In order to get resources to the children fastest, we will reluctantly pass the Senate bill,” Pelosi wrote in a letter to colleagues.

Although moderate Democrats supported the changed border security bill, more progressive Democrats including Alexandria Ocasio-Cortez were prepared to fight against it. And when it became clear that Pelosi was changing her stance on the bill, AOC quickly tweeted to her millions of followers:

Pelosi was willing to compromise on the politics of the bill in order to rescue the dying children stranded at the border and thrown into cages by Trump’s federal agents.

“The children come first. At the end of the day, we have to make sure that the resources needed to protect the children are available,” Pelosi wrote. ‘Therefore, we will not engage in the same disrespectful behavior that the Senate did in ignoring our priorities. In order to get resources to the children fastest, we will reluctantly pass the Senate bill,’ Pelosi wrote in a letter colleagues Thursday afternoon. As we pass the Senate bill, we will do so with a Battle Cry as to how we go forward to protect children in a way that truly honors their dignity and worth.”

The bill is now headed to Trump for his signature.

Meanwhile, the President tweeted about the bill from the G20 conference in Japan, saying, “A great job done by all!”

Although Pelosi was doing her best to defend the children, she faces fury from the people in her party who lean left.

AOC told CNN, “We are immediately going to just say yes to what got passed out of the Senate? We are a house majority, and we need to act like it.”

AOC tweeted, “Under no circumstance should the House vote for a McConnell-only bill w/ no negation with Democrats. Hell no. That’s an abdication of power we should refuse to accept. They will keep hurting kids if we do.”

Michigan congresswoman Rahiba Tlaib, who famously called to “impeach the motherf***er” when talking about Trump, also opposed the bill.

“Senate Democrats joined the leadership behind McConnell and supported something that had no safeguards, no basic human rights for these children. What are you doing? You’re just throwing money and saying continue what you’re doing, President Trump,” Rep. Tlaib said.

What do you think about the bill?