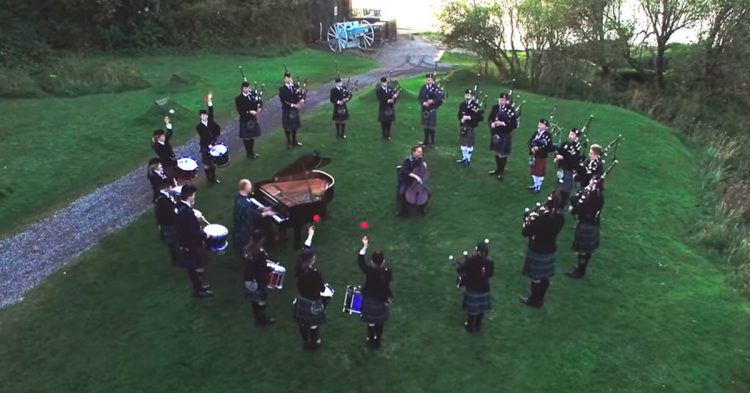 Most people around the world agree – music is a universal language. Like facial expressions, which are the same across human cultures and societies, music has the power to unite people even if they have no other way to communicate. There’s just something powerful about music and the way we connect to the sounds and the rhythms that go beyond verbal language and help us transcend our mundane reality.

This performance by a group of bagpipe players proves that perfectly. Although bagpipes are a distinctly ethnic instrument associated with the Scottish people in the United Kingdom – a group of players managed to use the instruments to cover the ever-popular “Fight Song” by Rachel Platten (below).

After the song was released, it became an instant hit. Platten has spoken widely about how she was inspired to write the song, as is quoted on the song’s own Wikipedia page:

“‘Fight Song’ was inspired by a lot of experiences that were hurting me, and that was making me feel like maybe I didn’t have a chance in this industry. I wrote it because I needed to remind myself that I believed in myself. No matter what, I still was going to make music, even if it was on a small scale. Even if it was just for me.”

At another point, she said: “I really challenged myself in writing the past couple of years to be vulnerable in my lyrics. I didn’t want to skate past what was hurting. It didn’t scare me to be vulnerable because I think that’s when you get something great.”

The song has become a personal anthem for many people. And that’s why it has been taken on as a cover song by the ever-popular YouTube performers The Piano Guys. In their rendition of the hit song, they included a group of bagpipe players to take “Fight Song” to a whole new level of amazing – one that Rachel Platten probably never could have conceived up while drawing from the inspiration in her life for the song.

The Piano Guys refer to the song as “Scottish” version of the top 40 hits. They wrote in the YouTube description:

“When we first heard Rachel Platten’s “Fight Song” we were inspired by its message. In a world where we too often talk about our differences, we have at least one thing in common. We all struggle. Not in the same way, nor at the same level, but we all want a fighting chance. And we all share in one gift: The will to make the most of our lives.

“To take what we’ve been given and turn it into something better could be considered the sentient measuring stick of success. But to do so seldom is simple and more often requires we fight. Not against each other. But against the current threatening to drown the ambition in us.”

Take a moment to watch this amazing cover of “Fight Song” by Rachel Platten and Dave Bassett. It goes without saying that you’re going to absolutely love it – and the bagpipes are an astonishing touch!