Basketball Player’s “Brutal” Cheap Shot Gets Him Barred From Campus 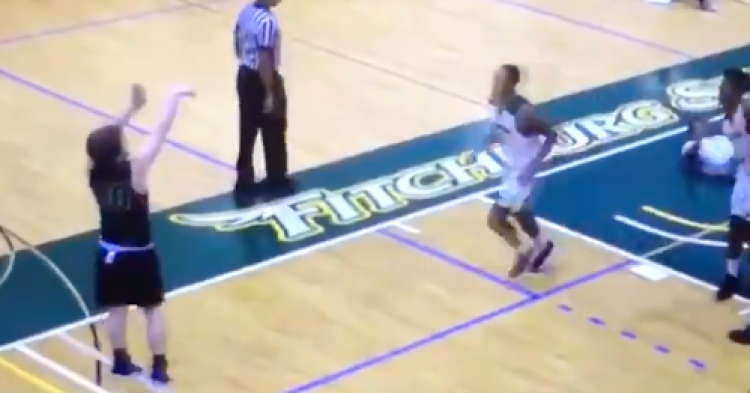 Although football is known for being America’s most violent sport, basketball takes a close second. Players often pound and bump into each other while competing against one another on the court. While referees do stop gameplay to address fouls, players still play very hard and use aggressive tactics against one another in order to win the game. However, one college basketball player with Fitchburg State University took things way too far when he made a cheap shot against a player with Nichols College during their game on Tuesday night.

The cheap shot shocked fans and critics alike. Nichols College player Nate Tenaglia was taking aim for a three-point shot when Fitchburg junior guard Kewan Platt threw an elbow at Tenaglia, knocking him out of the play. As a result of the violent incident that occurred during gameplay, Platt was suspended from the college basketball team and was also barred from his college campus because of the violence he brought into the basketball game.

After the cheap shot occurred on the court, Fitchburg State released a statement concerning Platt and what they planned to do about him now that his violent tendency had been revealed during gameplay.

“The Fitchburg State community is appalled by the conduct displayed during Tuesday night’s home basketball game. The player involved has been indefinitely suspended from the team and barred from campus, effective immediately,” the college’s statement said. It added, “His behavior is antithetical to our community values and good sportsmanship. Fitchburg State does not tolerate behavior that violates those standards. The case is being reviewed at the student conduct level for consideration of further sanctions.”

The player’s actions have not only gotten him kicked off the college basketball team, but he is also facing expulsion from the university. It is still unclear whether or not Platt will face any legal charges for his cheap shot on Tenaglia during the game. Either way, it is safe to say that his career as a college basketball player is over.

The college basketball player’s cheap shot has not only gotten him removed from the team and his college campus, but it has also shined a light on the aggressive and violent tendencies that are often seen in basketball games. It is important for players to remember that while they are competing against one another on the court, they should always maintain a level of sportsmanship and respect for their opponents. Violence has no place in the game of basketball or any sport for that matter.

Basketball fans were very disappointed to see such violence occur on the court. Most people are pleased that Platt has been kicked off the Fitchburg team and will no longer play for the squad.

What do you think about this college basketball player’s cheap shot? Do you think it was wrong for him to be removed from the team and banned from campus?