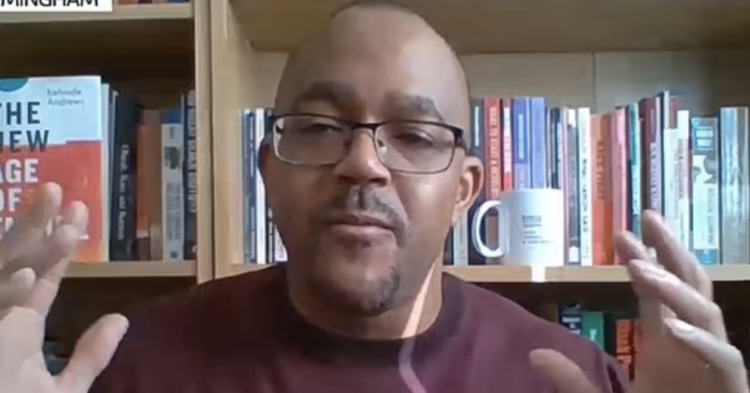 Professor Kehinde Andrews made some shocking comments about the British monarchy. As a Black studies professor, he is often tapped for debate programs because his views are highly controversial. However, the Birmingham City University professor made shocking comments this week. During the television appearance, the campaigner told the others on the show about how the Queen of England is “the number one symbol of white supremacy in the entire world.”

The conversation started after the topic about how Oxford University students voted to remove a portrait of the Queen from one of the common rooms. Andrews wanted to speak about why he thought the removal of the Queen’s portrait “is such a big deal.”

In previous comments, Professor Andrews had referred to “whiteness” as a “psychosis” and believes that “genocidal” capitalism needs to be overthrown in order for the world to be a happier and better place. He has also been known to compare Sir Winston Churchill to his archnemesis Nazi leader Adolf Hitler.

Professor Anders appeared on the popular British talk show Good Morning Britain to share his views about whether or not Oxford University had canceled the Queen as part of the rising tide of cancel culture that continues to spread across the entire globe.

“If we’re honest, the Queen doesn’t just represent modern colonialism. The Queen is probably the number one symbol of white supremacy in the entire world,” Andrews stated on the video, which was filmed virtually from his office. “A born to rule elite of this really white family. The head of the commonwealth, which is actually the empire.”

The debate began to rage all because students at Magdalen College believed that the portrait of the Queen was “unwelcoming.” The painting was located in the Middle Common Room. They wanted her portrait removed because “she represents the recent colonial history,” given that she has been in power since the middle of the 20th century.

A large majority voted in favor of removing the Queen’s portrait, which was why the topic had become a topic of national debate across the United Kingdom. One student even said that the portrait had to go because “patriotism and colonialism are not really separable.”

The controversial portrait depicted the Queen in her youth. She was adorned with a meaningful sash symbolizing her role as a member of the Royal Victorian Order. She also was wearing a plethora of jewels.

Professor Andrews added: “Even in that picture, she’s wearing jewels stolen from different parts of the black and brown world. If we’re 100 percent honest, that’s what the Queen represents, and if the students decide they don’t want the Queen in the common room, I’m not sure why it’s such a big deal.”

Politicians across Britain called the removal of the Queen’s portrait both “absurd” and “ignorant.”

British politician Gavin Williamson tweeted, “Oxford University students removing a picture of the Queen is simply absurd. She is the Head of State and a symbol of what is best about the UK. During her long reign, she has worked tirelessly to promote British values of tolerance, inclusivity, and respect around the world.”

Do you think the Queen of England should be canceled for being a symbol of colonialism?