BLM Crowd Cheers As Confederate Statue Is Removed After 131 Years 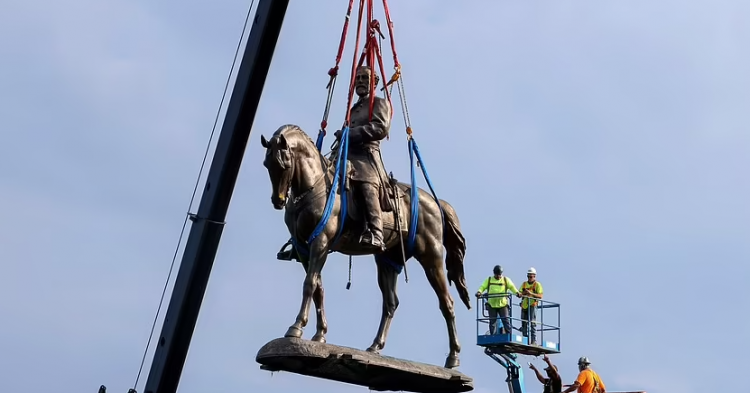 Police in Richmond, Virginia, closed down roads as work crews prepared to remove a statue of Confederate General Robert E. Lee. The twelve-ton bronze statue, which stood at 21-feet tall, was removed after 131 years (it was erected in 1890) because the majority of Virginians no longer wanted to honor a war hero who fought to defend slavery and keep Black people in chains.

The statue’s removal was slated for first thing in the morning – 8 am – and was watched by hundreds of Black Lives Matter activists who gathered around the Richmond statue to watch crews remove it from their city. The activists chanted various “Black Lives Matter” slogans while others burst into song, singing “Na Na Hey Hey Goodbye” as the Virginia workers hauled the statue away from its once prominent location. Workers gave the crowd a countdown before they lifted the statue off the pedestal. 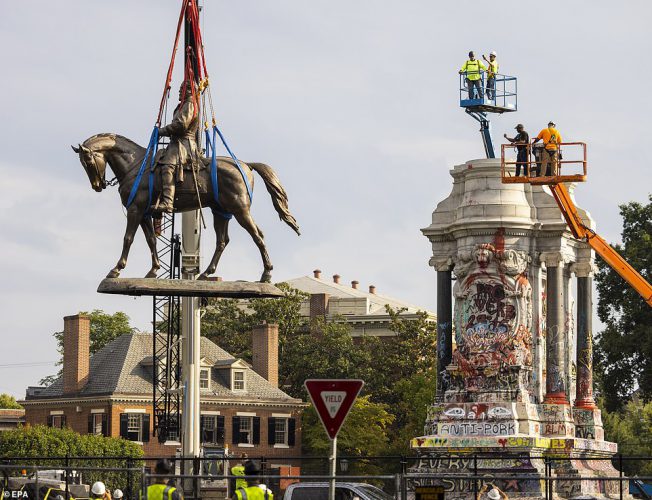 By 9 am, the statue was off the pedestal and on the dirt, surrounded by a fence that kept the crowd back. Once the Confederate statue was on the ground, workers immediately began sawing it into pieces. Crew workers used several electric saws to chop up Lee’s likeness, severing the top of the statue first.

The large statue of the Confederate hero was erected in 1890, twenty-five years after the Union won the Civil War and twenty years after Lee’s death. The statue was erected thanks to funds from a Confederate legacy organization, the Lee Monument Commission, which was headed by Lee’s nephew, former Virginia Governor Fitzhugh Lee. 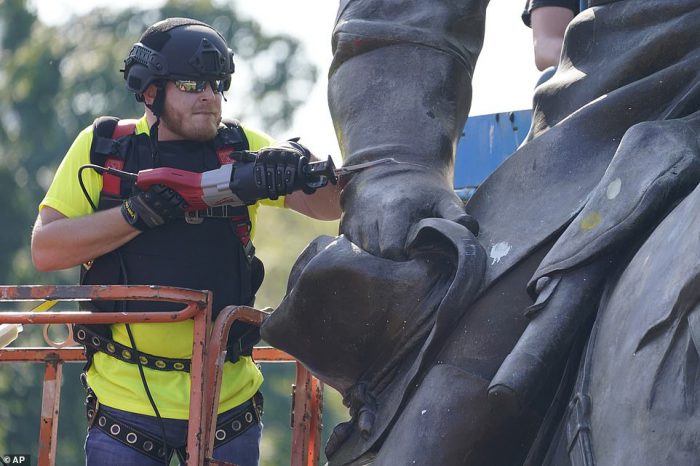 The statue was accompanied by a time capsule that was filled with Confederate memorabilia. The time capsule has since been disposed of and replaced with a new one that contains 39 important “artifacts” from 2021, including a vial of COVID-19 vaccine, a Black Lives Matter sticker, plus a “Virginia is for Lovers” LGBTQ pride pin.

“This was a long time coming, part of the healing process so Virginia can move forward and be a welcoming state with inclusiveness and diversity. (The statue of Lee represented) “400 years of history that we should not be proud of.” 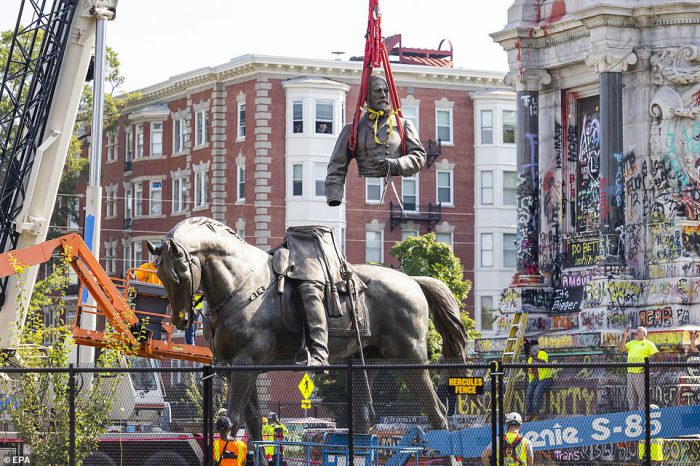 The removal of Lee’s statue was first announced in June 2020, ten days after George Floyd was murdered by police. Anti-Black Lives Matter organization tried to keep the Lee statue and held up Northam’s proclamation with a legal battle. However, the Supreme Court of Virginia confidently ruled that the statue of Lee needed to come down immediately, clearing the way for its removal on Wednesday.

Governor Northam added, “This monument and its time capsule reflected Virginia in 1890—and it’s time to remove both so that our public spaces better reflect who we are as a people in 2021,’ he said in a news release. The past 18 months have seen historical change, from the pandemic to protests for racial justice that led to the removal of these monuments to a lost cause. It is fitting that we replace the old time capsule with a new one that tells that story.”