BLM Founder Is Demanding A Meeting With Joe Biden 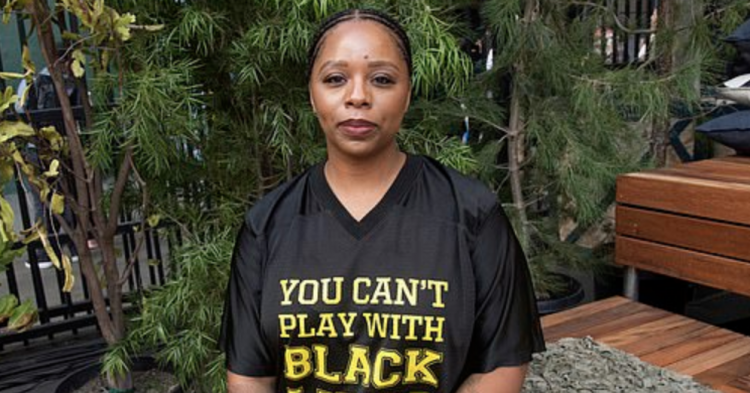 Patrisse Cullors co-founded the Black Lives Matter movement to put a stop to police brutality and to end racial discrimination and bias in the United States. Now that Vice President Joe Biden is preparing to take the keys to the White House, Cullors is demanding a meeting with the president-elect. Cullors demanded a meeting with both Biden and Vice President-elect Kamala Harris because “we want something for our vote.”

Black Americans came out in droves to vote in the 2020 presidential election. Georgia flipped blue because of the monumental Black vote in Atlanta and the Atlanta suburbs. Now, the Black Lives Matter movement organizers want to speak with the President-elect to make sure Biden has a plan to support Black lives in 2021 and beyond.

“Congratulations on your election to the Presidency and Vice-Presidency of the United States. Like so many, we are relieved that the Trump era in government is coming to a close. As we celebrate his electoral demise, we also know that his political exit does not ensure an end to the intolerant conditions faced by Black people in America.”

She continues: “Without the resounding support of Black people, we would be saddled with a very different electoral outcome. In short, Black people won this election. Alongside Black-led organizations around the nation, Black Lives Matter invested heavily in this election. ‘Vote and Organize’ became our motto, and our electoral justice efforts reached more than 60 million voters. We want something for our vote.” 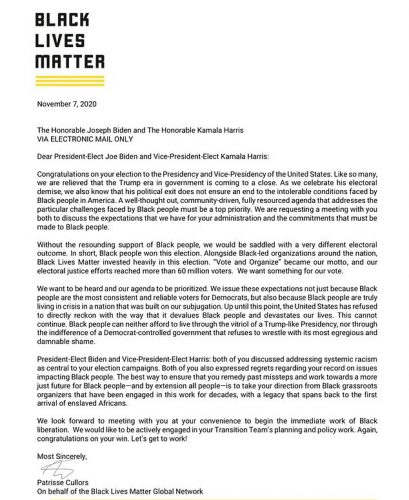 “We want to be heard and our agenda to be prioritized. We issue these expectations not just because Black people are the most consistent and reliable voters for Democrats but also because Black people are truly living in crisis in a nation that was built on our subjugation. Up until this point, the United States refused to directly reckon with the way that it devalues Black people and devastates our lives. This cannot continue. Black people can neither afford to live through the vitriol of a Trump-like presidency nor through the indifference of a Democrat-controlled government that refuses to wrestle with its most egregious and damnable shame.”

Cullors continued, “The best way to ensure that you remedy past missteps and work towards a more just future for Black people – and by extension all people – is to take your direction from Black grassroots organizers that have been engaged in this work for decades.”

The letter ends with an optimistic hope to work with Biden and Harris to improve conditions for America’s population of Black and Brown people.

“We look forward to meeting with you at your convenience to begin the immediate work of Black liberation. We would like to be actively engaged in your Transition Team’s planning and policy work. Again, congratulations on your win. Let’s get to work!”

President-elect Joe Biden has not yet publicly responded to the message from the organizers of the Black Lives Matter movement.

What do you think about the letter to the President-elect?