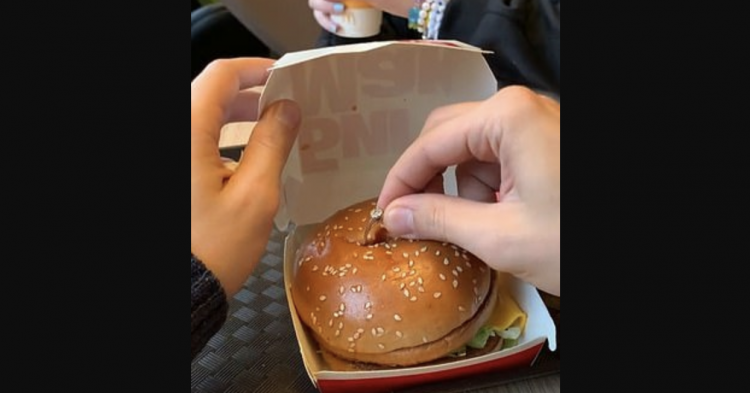 A Russian boyfriend decided to “go American” with his wedding proposal, so he stuffed his ring into a McDonald’s Big Mac before handing the burger over to his beloved girlfriend. Because he selected the fast-food restaurant as the “perfect” proposal place, he was ridiculed and mocked online for his romantic gesture. The Big Mac proposal was posted to TikTok when Russian Alina Dumova shared footage from the burger joint to mark her big life event.

Because the proposal occurred at a McDonald’s in Russia, Dumova’s boyfriend thought it would be an ingenious idea to stuff the engagement ring into the sesame seed bun and hand it over to his girlfriend. The video proposal was uploaded to Dumova’s TikTok account, which has 69,000 followers. In a matter of hours, the bizarre proposal in a Big Mac racked up more than thirteen million views. 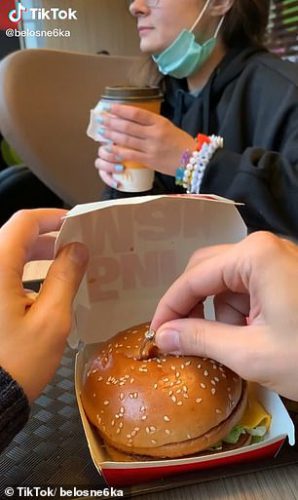 The footage depicts the boyfriend pressing the engagement ring into the top of the burger. In the background, the unsuspecting girlfriend sips her coffee beverage without having a clue to her lover’s intentions to marry. He then pushed the burger box over to Dumova and awaited her reaction.

The clip was set to the song, Marry Me by Rasheeda. Although the clip did not capture Dumova’s reaction, it is assumed that she accepted his bizarre proposal and even liked it – hence her uploading the video to her TikTok account. 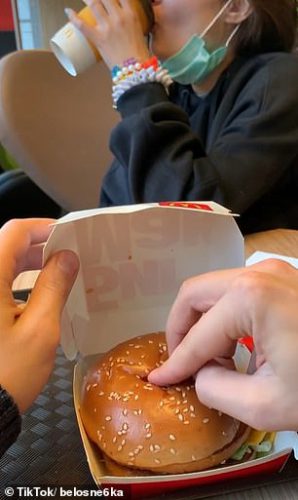 The pair have been together for four years. Since uploading the Big Mac proposal video, she uploaded another video to the Chinese-created TikTok app showing her jumping off a boat with her lover while she wore a wedding dress.

Most people who viewed the bizarre proposal thought it was a very bad idea. They mocked the boyfriend for trying to marry the love of his life this way.

One person wrote: “Pound Shop ring on a Mc sandwich, who could say no to that.” 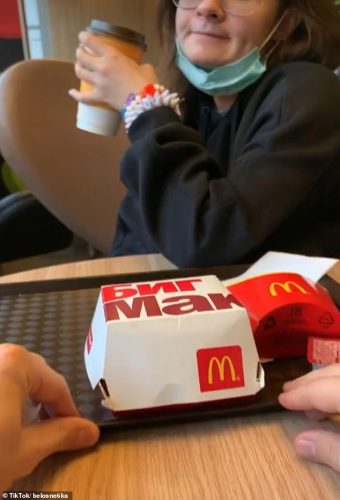 “Tell me she ate it and broke a tooth,” another person joked.

Another viewer wrote, “Why would you propose to someone at McDonald’s, why not a fancy restaurant.”

A fourth said: “Nah, that’s just stupid. Why would you push the ring that far down? She could have choked! Glad I date sensibly.”

“He’s a keeper love, don’t let this classy lad out of your grip. We can’t wait to see the wedding photos of the reception in KFC.”

“People who moan about the size of the ring etc. Guess what. I bet you have awful lives. Loads of people can’t afford ludicrous diamonds that aren’t worth a fraction of what you pay for them and are very much in love and stay in love for the rest of their lives together.”

“Well if he proposed with a ring in a burger box, you need to keep the bar low for the future, dear.”

“What’s with all these pathetic proposal gimmicks, all videoed to get their idiocy in the press. Grow up, people, if getting engaged isn’t special enough for you, don’t bother.”

What do you think about the Big Mac proposal?