Bride Doesn’t Want Her Fiancé’s Child At The Wedding. Calls The Child “A Mistake” : AWM

Bride Doesn’t Want Her Fiancé’s Child At The Wedding. Calls The Child “A Mistake” 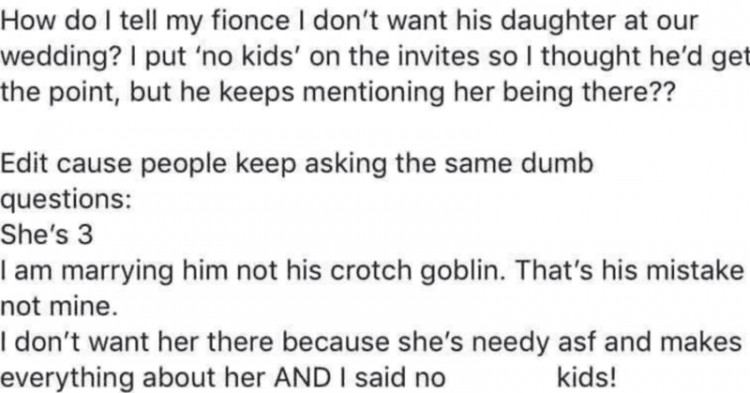 Weddings are some of the best events we ever get to attend. Not only are they a wonderful party, but they’re also a celebration of love and unity. They’re the joining of two families in a bond that is supposed to last a lifetime. Because weddings bring families together, it’s expected that some children might have to attend – especially if they’re close in the family – but there is also merit in having a wedding without kids.

As someone who got married not so long ago myself, I understand why some brides and grooms would ask for the wedding to be kid-free. It’s more fun to have adults at the party than to have to worry about babysitting children or toddlers. But when it comes to children in the family, that’s usually where the bride and groom are happy to make an exception.

However, one bride has made it clear that she wants no kids at her wedding. She even put “no kids” on the wedding invitation. But the bride did not just mean this for the guests who would be attending from out of town – she meant this for her fiancé who had a child from a previous relationship. Because the bride hates the fiancé’s child as the child reminds her of the “mistakes” the man made in the past, she has turned to the internet to ask your advice on how she can get the fiancé not to bring his child to his wedding.

“How do I tell my fionce (sic) I don’t want his daughter at our wedding? I put ‘no kids’ on the invites so I thought he’d get the point, but he keeps mentioning her being there??”

People quickly responded to the hateful bride, lashing out about how mean she was being toward her soon-to-be stepdaughter. It seems to almost everyone except for the bride that she is setting herself up to be a typecast Disney villain form Cinderella or one of the other flicks that feature an evil step-mother.

After responses started rolling in on the Reddit forum, the bride added an edit.

“Edit cause people keep asking the same dumb questions. She’s three. I am marrying him not his crotch goblin. That’s his mistake. Not mine. I don’t want her there because she’s needy asf and makes everything about her AND I said no kids!”

With this more information, people were shocked that she really felt this way toward a toddler. Not only did the little girl never ask to be born into such a hateful life, she still loves her dad despite the fact that he is no longer with the girl’s mother.

Responses included: “Omg pls let this not be for real!! How does she talk about her fiancé’s kid like that?? Omg, this makes me want to cry.”