Bride Starts To Say Her Vows When Her Dad Jumps Up To Make An Announcement : AWM 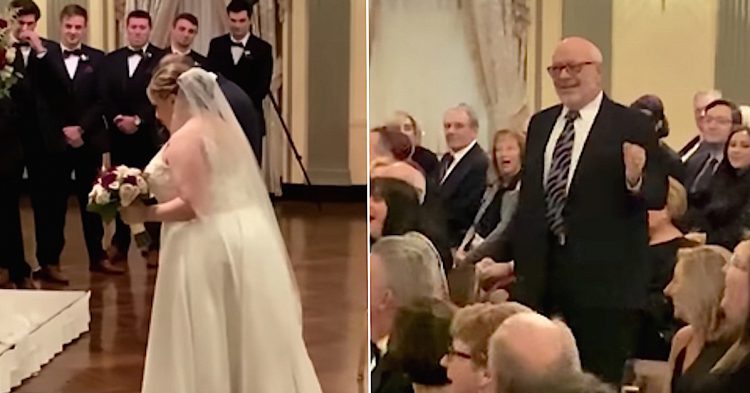 Every bride wants her wedding day to be special. It’s her chance to show off to the world the love she has found and is vowing to cherish for the rest of her days. It’s also special for the groom, but this story revolves around the bride and what her father did to surprise her on her big day. The heartwarming moment occurred at the wedding of Alex and Tommy Ellison when they got married in November 2019 at the Hotel DuPont in Wilmington, Delaware.

It’s not often that you hear of a story originating from Delaware, so you know it must be good to make national news like this. And the heartwarming moment occurred right when the bride was about to express her wedding vows to her husband-to-be.

Alex was about to utter the words when her father stood up and shocked the audience with a performance that blew away the bride with glee. Although he’d been planning this surprise for months on end, no one knew what he was going to do. It was a special secret that he wanted to deliver perfectly for his darling daughter. He knew she’d love it, which was why her father, Neil, practiced like hell to make sure he did a good job.

“If this went sideways,” Neil said, “I just ruined my daughter’s wedding.”

That was the last thing this doting dad wanted to do. Alex’s brother has autism, and she wanted to include him in the wedding ceremony but didn’t know how to do it. She knew that putting him in the spotlight like that would thrust her brother into a high-pressure situation. That wouldn’t work for him, which was why she didn’t explore many options to fulfill her dream. But little did she know, her dad was plotting ways to include her brother in the wedding behind her back. And this was a good time for dad to be doing something behind the bride’s back.

Out of the 170 guests at the Delaware wedding bash, only twelve of them knew about Neil’s big surprise. That’s why it left the vast majority of people in a state of wonderous shock that they never wanted to recover form. They were inundated with “feel good” feelings that left them elated for the rest of the ceremony and into the reception.

When Neil started to deliver his performance, it left Tommy and Alex stunned at the front of the ceremony. They turned to Neil with shock and confusion on their faces. They wanted to know what he was doing, interrupting their big day. Why was he trying to steal the spotlight away from them? Soon everything became clear.

In the video included below, you’ll get to see the performance Neil had planned for his beloved daughter’s wedding day. It’s going to make your heart melt.

Don’t let the suspense get you for longer. Press play now; you won’t regret watching this clip.

What do you think about dad’s surprise song for his daughter during her wedding?