Video: Bully Films In Between Girls Legs, The Next Move Lands Her Fighting For Her Life 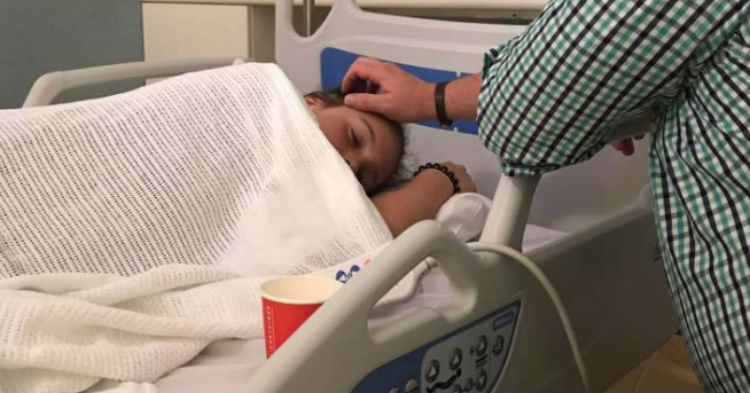 Bullying seems to be more common than ever before. And recently, a mother took to Facebook to expose how bullies abused her daughter so bad that she wound up in the hospital. As a way both to share her frustration with the educational system and to raise awareness around the seriousness of bullying, Leigh Davey wrote an update on the Love What Matters Facebook page. Thousands listened.

“Our beautiful girl has been subjected to some awful bullying at school. It’s been a very private seven months for us, dealing with this, immediate family only,” Davey wrote.

Although she has kept it quiet for so long, Davey decided that the world needed to know the truth about the horrors her daughter’s bullies inflicted upon her.

“In this age of social media, children (because they are children) think it’s ok to send hateful messages (to me also along with their parents who won’t take responsibility) without consequences. I’ve had calls from these children calling me an old hag because I’ve defended our daughter, approached parents and pleaded with them to talk with their children and ask them to stop. I’ve even approached the children themselves, but been threatened by parents with harassment.”

When mom confronted the department of education in her state, they refused to penalize the bullies. They did not expel them from the school because, as they argued, “every child is entitled to an education.” Apparently, the education establishment believes that everyone, except hospitalized bullying victims, deserves a fair shot.

“What about our child’s entitlement?” the distraught mother asked.

Because bullies had eroded her daughter’s self-esteem, the girl was sent home after she was caught causing herself harm. Instead of confronting the bullies who had caused her to drop so low, the teachers counseled the girl on how to be more “resilient” to the taunts and horrible remarks the bullies made about her and to her face.

One incident involved body shaming. The girl had sat at her desk, and unbeknownst to her, a student filmed a video of her under the desk trying to snap images of her slightly spread legs. The bullies publicly shared the video and said there was a “smell” coming from between the child’s legs.

This abuse destroyed her self-esteem and status in school.

“It was posted to snapchat. I spent 90 mins with the police as they tried to determine if it was photographing and distribution of pornographic material. Yes, a 12-year-old can be prosecuted if the content breaches certain criteria. Sadly our daughter’s didn’t, but she was subjected to weeks of ridicule. Repercussions? The girl who posted the video lost her playtime. The person who took the video? Nothing, because no one would tell who it was,” Davey explained.

When her daughter tried to kill herself, she was hospitalized. The bullies had done this.

“The school has a safety plan for the bullied child, our daughter. And the bully? She only loses recess and lunch privileges. This is infant school punishment!” she wrote.

Other parents are outraged that Davey’s school does not punish bullies. How do you believe the school should respond?