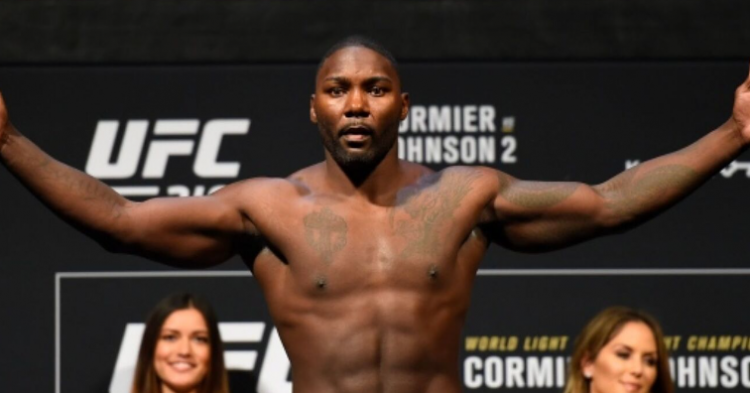 Former UFC title challenger Anthony ‘Rumble’ Johnson has passed away suddenly at the age of 38. The cause of death is unknown at this time, but Johnson had been battling an unspecified illness over the past year. He was due to fight for the Bellator light-heavyweight title in September 2021 but pulled out of the fight last year due to his health.

Tributes are pouring in for the ex-fighter, who will be remembered as one of the most powerful strikers in UFC history. Although he lost his life at such a young age, the former UFC fighter will go down in history for his work in the ring.

As Johnson struggled with his unnamed health condition over the last year, his manager Ali Abdelaziz sent out a call to fans to “pray” and send up prayers on behalf of the former UFC fighter. The calls for prayers were requested as recently as last month which indicated that Johnson’s health was failing faster than ever expected.

“Rumble, he’s going through some health problems right now. It’s very sad,” Abdelaziz said during an ESPN interview in October. “I think, I want everybody to pray for him. Pray for Anthony. It’s not going well. He’s very strong, spiritually. But pray for him.”

Anthony “Rumble” Johnson never opened up about exactly what he was dealing with when it came to his health. However, he did use social media to inform his fans that he was facing a terrible bout of illness that was affecting his ability to fight like he once used to. He shared a few thoughts with his loyal fans on Instagram before the illness took his life this November.

His post read: “Really wish I could go into detail about how ill I truly am. Just know I need as many prayers as I can get and I’ll see you in 2022 God willing. Never been this afraid of anything in my life but I’ve remained strong with the support of friends and family.”

Johnson fought for the light-heavyweight belt in UFC two times but both times lost to all-time great Daniel Cormier.

Social media users shared many tributes to Johnson who they will remember as a great UFC fighter who always gave each bout his full attention and effort.

“Rest Easy my brother. For a guy who struck fear in so many people’s hearts, Anthony Johnson was a caring person. From random text to check-ins during loss. What a person he was, Rumble will be missed. Sometimes life doesn’t seem fair. Horrible news #RIP #Rumblesquad @Anthony_Rumble.”

According to Daily Mail, American MMA fighter Michael Chiesa posted: “RIP Anthony ‘Rumble’ Johnson. One of the most prolific KO artists our sport has ever seen. My prayers go out to his family and everyone affected by this tragedy.”

UFC commentator John Gooden added: “Heartbreaking to learn of the tragic news that Anthony ‘Rumble’ Johnson has passed away. I have a poster of him by my desk looking powerful. My thoughts and prayers are with his family and friends.”

Johnson is survived by two children.