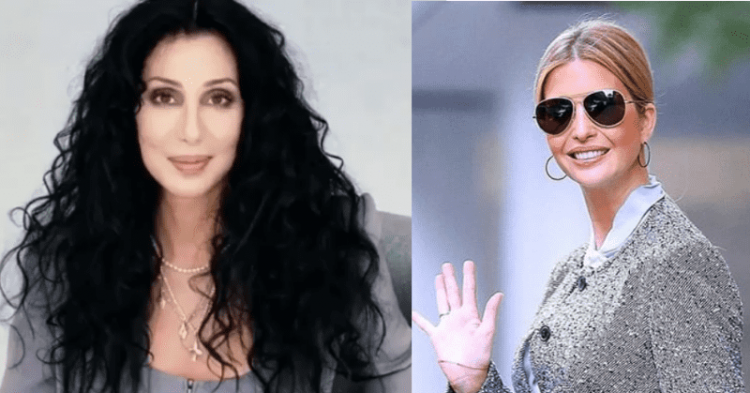 Cher is not one known for holding back the punches. She’s an outspoken critic of everything she thinks is wrong in the world. And as a leftist Hollywood elite, that means her sights have been set on Donald Trump ever since he stood up and called Mexicans “rapists” and called for Americans to build a wall. But during another tweet, Cher made it clear that she’s not only upset with Trump but his children as well since they’re also part of his administration.

The controversial tweet was posted on May 8, 2019, and spoke about how Trump’s favorite children, Ivanka Trump, and Donald Trump Jr. are working to create voting machines in China.

Cher then referred her fans to an article posted on Bustle that dove into more depth as to Ivanka’s dealings with the Chinese officials. The article talks about how her trademark could become a conflict of interest, given her role as a White House advisor.

Bustle reported, “The October-approved trademarks encompass clothing and accessories, like handbags, shoes, wedding dresses, and jewelry. But, perhaps more interestingly, the preliminary trademarks also include unusual items like nursing homes, sausage casing, and voting machines that would be used in China.”

Because Ivanka has gotten into trouble with her brands due to its close relations with foreign nations, she has had to be careful in recent years.

“The brand has filed, updated, and rigorously protected its international trademarks over the past several years in the normal course of business, especially in regions where trademark infringement is rampant,” Abigail Klem, the former president of Ivanka’s brand, said in a 2017 statement.

Not only was Ivanka’s brand working vigorously to secure power overseas, but it was also reported that she plans to dissolve her company but wants trademarks to cash in overseas.

“She’s dissolving the company now but is continuing to get trademarks so she can sell her stuff all over the world later,” Richard Painter, chief White House ethics lawyer for former president George W. Bush, told the Washington Post in the summer of 2018. “What better time to get those trademarks than now, when every government around the world wants to play nice (with Trump)?”

Not even a month before Cher’s tweet about Ivanka’s Chinese business dealings, she wrote another one eviscerating Trump’s very “soul.”

“DEMS STILL DONT GET, THEY’RE PLAYING POLITICS,& trump’s PLAYING BUTCHER YOUR ENEMIES & CREATE CONSTANT MAYHEM. HE’S IGNORANT THUG WITH LIZARD BRAIN THAT GUARANTEES HIS SURVIVAL ABOVE ALL ELSE. IF DEMS R WAITING 4 HIM 2 HAVE EPIPHANY, GOOD FKNG (luck). HE HAS (black heart) &SOUL OF (death).”

Cher has not held back her remarks regarding President Trump. She’s one of the most vocal critics of the president. In contrast, she spoke highly of House Speaker Nancy Pelosi at the VH1 Trailblazer Honors.

“When I see Trump spew his hatred and tell his gazillion lies, I get pissed off, but I also feel really uneasy. Then, I see Nancy come on TV, and I think, ‘It’s all good. Nancy’s in the house.'”