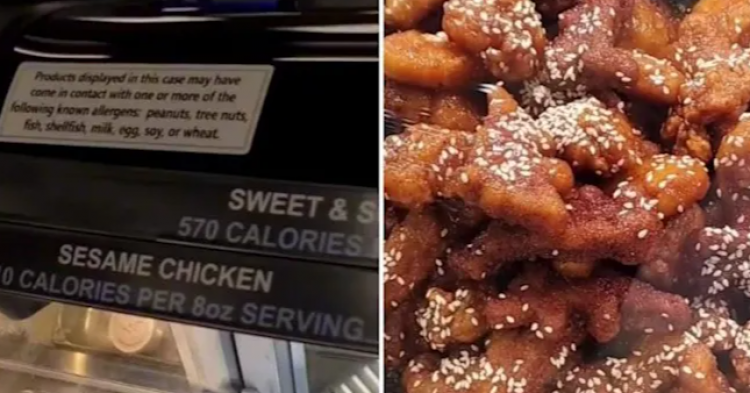 “Are y’all seeing what I’m seeing?” wrote a TikTok user who saw something shocking at a Chinese buffet in her community. The TikToker was shocked to see the restaurant using dinosaur chicken nuggets served in the buffet. The meat product was covered in sesame seeds and sauce, which made them look pretty appetizing. However, the TikTok user could not believe it when she saw the frozen food product at the restaurant and decided to share a video clip of the offering to get more people’s reactions to the buffet item.

The video was quick and to the point. The user turned the camera onto the sesame seed dinosaur nuggets and used various features on the Chinese-created social media platform to create a video that went viral. After using the text-to-voice feature to read the line that started the article. The camera then zooms in several times to give a clear view of the chicken nuggets that were clearly taken from the grocery store frozen food section and used them to serve customers at the Chinese buffet.

The video was shared on TikTok, Reddit, Twitter, and other social media platforms. The viral clip has been seen more than two million times and received over one hundred thousand likes in addition to the thousands of comments that were made about it.

“That would be worse than an infestation! I mean, we can just buy them from the grocery store!”

A user said that they would be happy to eat them if it was the only thing available.

“Dino nuggets over no food, I mean come on. It looks pretty good too!”

Another person joked about going shopping for sesame seeds and dinosaur chicken right after watching the video.

“I’m getting me some Dino nuggets. Yum! I might just go buy sesame seeds and chicken, too, while we are at it. #yummyinmytummy.”

More than ten thousand comments were contributed to the video by TikTok users who were both delighted and shocked to see the restaurant using dinosaur chicken nuggets. One person pointed out that they would be proceeding to take all of the sesame seed dino nuggets if they saw them at the buffet.

“I would one hundred percent eat dino nugget sesame chicken.”

“I don’t care that they used dino nuggets. I just wanna see how good they taste,” wrote one delighted TikToker.

“Chicken shortage so real that they replaced it with prehistoric meat.”

“Bruh, not the dino nuggets.”

One person pointed out that supply chain problems and inflation are causing problems for restaurant owners and other businesses as well as consumers.

“Oh my God, dino nuggets? This inflation is insane.”

Other users were expecting the video to have a “yuck” factor. Others worried that the sesame chicken dino nuggets would be covered with maggots or other creepy crawlers.

“Me looking for maggots. ‘Is that a dino nugget?’”

“I was looking for bugs, but dino nuggets!”

“I was too scared of seeing something move.”

“I thought I was looking for maggots disguised as sesame streets.”

“I was looking for maggots instead of seeds.”

“I was waiting for one of the sesame seeds to start moving or something.”

“I was searching for bugs.”

How would you react if your local Chinese restaurant served dinosaur nuggets?