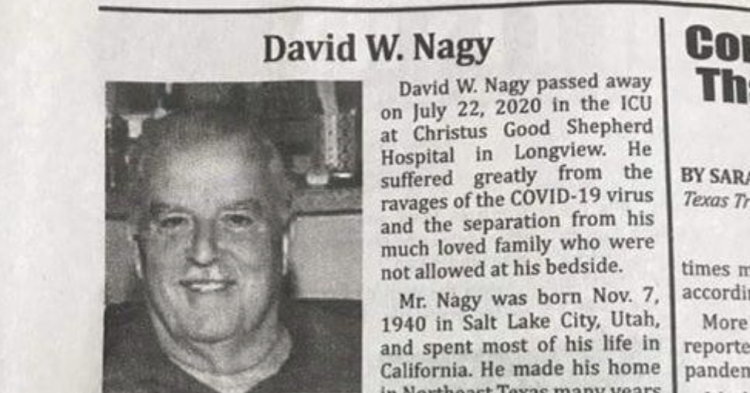 The obituary of a Texas man blames Trump and people who don’t wear masks for the 79-year-old man’s death. Written by the deceased man’s beloved wife, Stacey Nagy blasted Texans for failing to do their part in slowing the spread of the deadly virus and for President Trump’s lackluster national response, which in her view, allowed the virus to fester and issued a stark warning to Trump and his supporters throughout Texas, “May Karma find you all.”

The obituary has gone viral as thousands of Americans continue to die every day from the coronavirus, while other first-world countries are practically back to normal. Because money is valued over human life in America, the threat of the virus was pushed off until it overpowered the response. 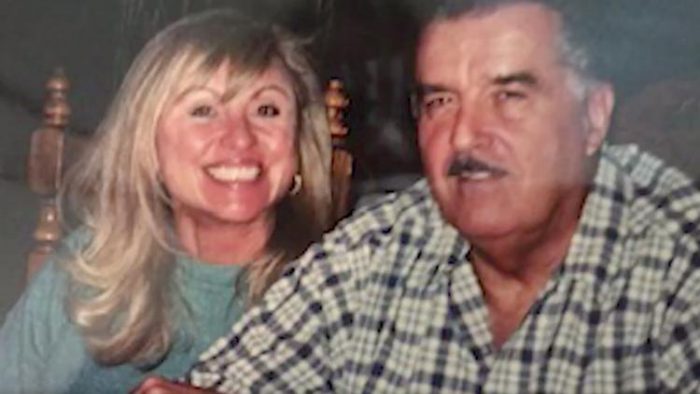 The full obituary reads: “David W. Nagy passed away on July 22, 2020, in the ICU at Christus Good Shepherd Hospital in Longview. He suffered greatly from the ravages of the COVID-19 virus and the separation from his much-loved family who were not allowed at his bedside.

“Mr. Nagy was born on November 7, 1940, in Salt Lake City, Utah, and spent most of his life in California. He made his home in Northeast Texas many years ago after retiring, living in Jefferson for the past three years. Mr. Nagy leaves behind his inconsolable wife, Stacey, his five children, Heath, Stephanie, Heather, David, and Vikki, as well as numerous grandchildren, great-grandchildren, and friends.”

The obituary continues by blaming Trump for Nagy’s untimely death. 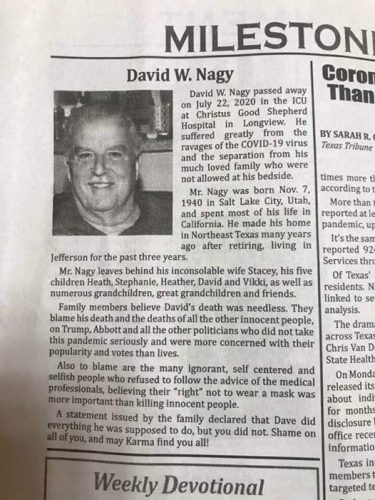 “Family members believe David’s death was needless. They blame his death and the deaths of all the other innocent people on Trump, Abbott, and all the other politicians who did not take this pandemic seriously and were more concerned with their popularity and votes than lives.

“Also to blame are the many ignorant, self-centered, and selfish people who refused to follow the advice of the medical professionals, believing their ‘right’ not to wear a mask was more important than killing innocent people. A statement issued by the family declared that Dave did everything he was supposed to do, but you did not. Shame on all of you, and may Karma find you all!”

The obituary sparked a heated debate all over the internet, including on Reddit, where the following responses were shared.

One incensed reader wrote, “The purposeful misinformation given to us by certain politicians has caused the people of this country so much pain. They are traitors to their country and need to answer to their crimes.”

“My grandfather died last week. He did not die of COVID, but because of the poor handling of COVID in Texas (and the US in general), I was not allowed to see him before he died. I had to say goodbye over the phone, and he could not see me or speak. It was heartbreaking.”

“I hate wearing a mask. I feel suffocated, and after a while, it becomes moist. But I wear it on my way to work. 8 hours at work. On my way home. In shops. Basically, every time I leave my house. I hate it so much. But I wear it to help stop the spread.”

Wear your mask while out in public and keep six feet from everyone. You can help save lives.