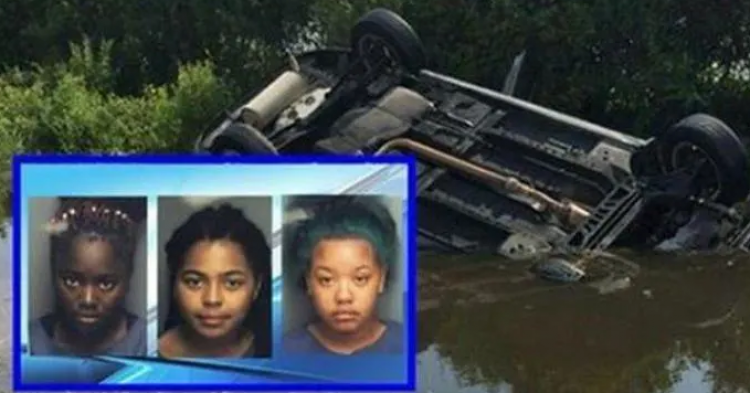 Police in Tampa, Florida, found themselves in hot pursuit of a stolen vehicle. At the time of the high-speed chase, the cops did not realize that they were pursuing a vehicle stolen by three Tampa teens, ages fifteen and sixteen. The three teen girls had stolen a Honda Accord and led police on the high-speed chase until the Accord was upended and crashed into a dirty pond.

Police did not try to rescue the girls after the stolen vehicle crashed into the pond, and the three teens ultimately died. Now, the parents of the three victims claim that the police should have done something to try to save the teenagers’ lives despite the fact that they had stolen a vehicle and led police on a high-speed chase across the city of Tampa.

After the police department released the officers’ dash camera footage, the parents became even more furious. The video evidence showed that the responding police officers did not make much of an effort to save the lives of the people in the sinking stolen vehicle even though they were at risk of drowning.

Nevertheless, Sheriff Bob Gualtieri stood behind his deputies and assured the people of Tampa, Florida, that his officers did everything by the book. He wanted people to know that he thought what they did was the right thing to do even though three teenagers died because of their lack of action.

“I’m not going to stand by and let these people cast a false narrative,” he said. “They’re reaching, and they want to be spin masters.”

According to the Sheriff, the pond was “thick with sludge” and was very difficult for the officers to safely enter.

Now, an attorney representing two of the deceased teens, Michele Whitfield, believes that the officers’ dashboard camera footage was not favorable and that “there are more questions that need to be answered.”

“I just feel like, at this point, the Sheriff is giving an appearance of transparency,” she told the Tampa Bay Times. “There are still some documents that I am waiting for.

Dashboard camera footage from the incident shows police officers doing nothing as the Honda sinks into the pond. Instead of trying to rescue the three teenagers trapped inside, the officers mill about and chat amongst themselves.

“It’s going all the way down. It’s almost fully submerged,” one deputy said in the clip. I hear them yelling, I think!”

Meanwhile, the sheriff claims that the officers did everything in their power to save the lives of the dying teenage girls. “Just because it’s not on cam doesn’t mean it didn’t happen,” Sheriff Gualtieri said.

Do you think the officers should have done more to rescue the drowning teens?