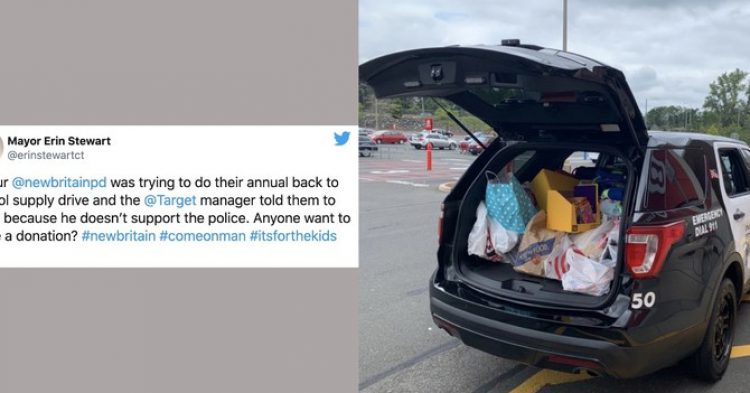 In an effort to support the New Britain community, Timothy Conaway partnered up with the New Britain Police Department to help create a back-to-school fundraiser program. Conaway is a resident of the Connecticut town and also the co-founder of Training and Motivation Center, which was created in connection with the local police force to help ensure children in need get the school supplies they require to have a successful year of education.

In August 2020, police officers working for the school supply drive went to a Target location in New Britain to pick up the goods. However, the manager of the Target location allegedly “kicked out” the cops because he did not support police departments. 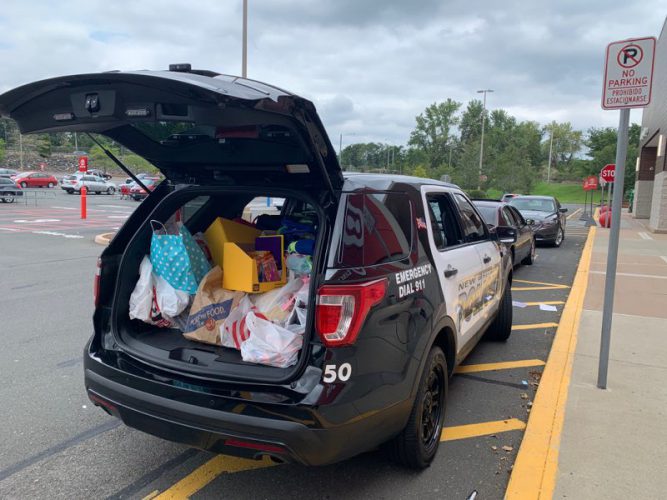 Although Conaway and the New Britain police officers were just trying to follow through with their “Stuff a Cruiser” event to get more school supplies to children in need, the Target manager asked them to leave almost immediately upon arrival.

“I told him I was here last year, and he didn’t agree or believe me, and he told us to leave,” Conaway told WTIC. “We were shocked. The officers were looking like, ‘really, you really you want us to leave?’ And he said ‘yes, leave.’”

Conaway admitted that he and the cops left the Target, but they were left confused and disappointed that they were turned away when trying to complete a fundraiser for needy children. The officers did not cause any problems at the Target location and left the store in a quiet and orderly manner.

Nevertheless, New Britain Mayor Erin Stewart (pictured above) learned about the way Target treated her cops, and she lashed out at the Minneapolis-based retailer on Twitter.

“So our New Britain Police Department was trying to do their annual back-to-school supply drive, and the Target manager told them to leave because he doesn’t support the police. Anyone want to make a donation? #newbritain #comeonmana #itsforthekids.”

The first person to reply to the mayor’s tweet was New Britain’s Fire Chief Raul Ortiz, who said: “I’ll donate. That is unbelievable. Isn’t community policing and involvement what we want more of? Our NBPD has been exceptional in that aspect.”

Less than an hour after she tweeted about the incident, the manager of the Target location called the mayor to apologize. The manager then made a personal donation of $500 to help make amends for the mistreatment of the police officers. The store manager also asked the cops to come back at a later date to complete the “Stuff a Cruiser” event for the children.

Target’s corporate headquarters called the entire thing a big “misunderstanding.” They released a statement on Twitter that said: “We have a long history of supporting the New Britain community, and we’re sorry for the misunderstanding. We’ve talked with police, and they’re returning to our store this weekend for their back-to-school drive. In addition, Target’s donating school supplies to support the efforts.”

In a further statement from Target’s corporate officers to The Police Tribune, the retailer wrote: “When our team saw the group collecting donations, and wasn’t aware the drive was going to take place that day, we asked for more information. An officer asked our team if they should leave, and we said yes so we could work with them to coordinate the drive together at another time. We spoke with the New Britain Police Department on Monday and Mayor Stewart’s office on Wednesday to clarify what happened, express our continued support for the school supply drive and arrange for them to come back to the store this weekend. Additionally, our manager did not, at any time during the conversation, express a lack of support for law enforcement. And as we have for many years, we contributed a gift card and school supplies for this great cause. We’re sorry that this situation has caused frustration in the community and took attention away from the supply drive.”

What do you think about Target turning away these officers?