Costco Forced To Remove This Offensive Doll From The Shelves : AWM

Costco Forced To Remove This Offensive Doll From The Shelves 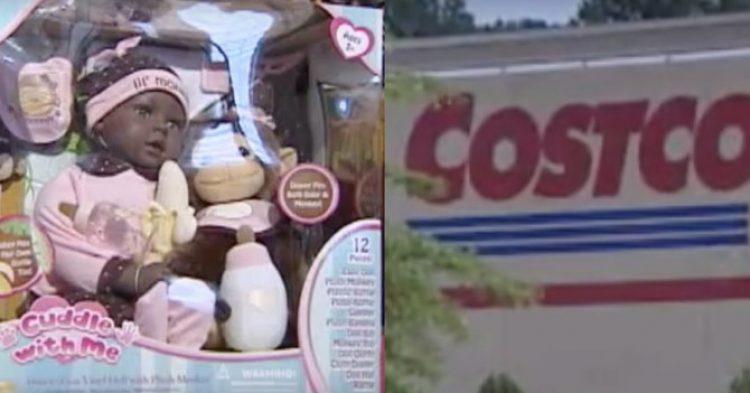 Costco has cornered the market when it comes to wholesalers. They’re considered one of the best – not only for their product offering but for their customer service as well. That’s why it might come as a shock to learn that Costco was recently slammed for selling a “Cuddle with Me” doll that customers complained was “offensive” and needed to be removed from the shelves immediately.

Community representatives and parents complained to Costco that the toy they were peddling was racist as racist can be. The doll, which was African America, wore a headband with the words “lil’ monkey” plastered across it. Not only did the makers of this racist doll label the black one a “monkey,” they forced it to wear the name across its head for all to see, further spreading shame and humiliation. 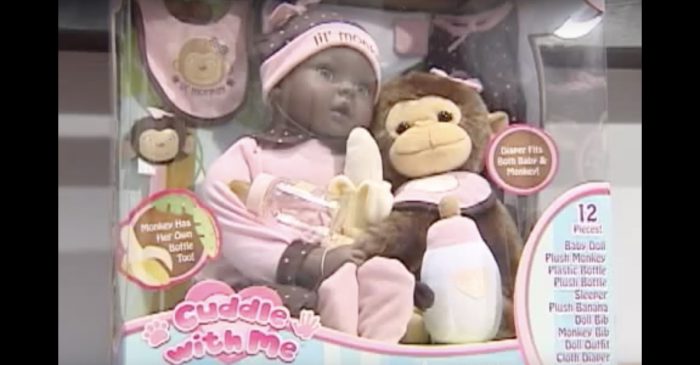 Besides the label of “lil’ monkey” on the doll’s forehead, there is also a monkey next to it stuffing a banana in the little baby’s mouth in a grotesque gesture, sexualizing the doll in a horrific – and criminal – way.

The makers of the doll don’t just have the racist ones against blacks. They also have Latina, white, and another doll with a panda bear labeled “pretty panda.” Can you guess which race of doll they decided to label that one with?

The maker of the racist “Cuddle with Me” dolls is Brass Key. They denied being racist despite labeling their black doll “lil’ monkey.” Instead of taking responsibility for promoting a horrible product, they claimed that the racist design was not in their company’s “realm of thinking,” implying that their racism was subconscious but just as perverse.

Brass Key laughed off the mistake as an “honest mistake.” They said: “We don’t think in that way. We don’t operate in that kind of thinking.”

Nevertheless, customers were not pleased with the way Brass Key laughed off the accusations of deep-seated racism within their product design teams.

While Brass Keys denied all responsibility for the racist design of their “Cuddle with Me” dolls, Costco manned up and has issued an appropriate apology. They apologized to all offended customers and said they pulled all the dolls from their shelves.

The complaint originated from Greensboro, North Carolina, where John Taylor and his wife came across the racially offensive doll.

Snopes reported that the cousin of Taylor wrote the following: “My cousin, John Taylor and his wife, Donna, who live in North Carolina, recently vent to Costco in Greensboro and could not believe what they saw perched on the shelf for sale. As the photos show, the baby doll is being hugged by a monkey, and the doll has a cap on its head, and that says ‘lil monkey’! They have lodged complaints with the Costco Corporate HQS, and their efforts succeeded in getting the doll pulled from the Greensboro store.”

The reporter writes, “These dolls are an insult to us all and need to be pulled from all Costco stores or where ever they are being sold. Costco also owes its customers an apology. I hope you are as outraged as I am, and if so, call Costco HQs and demand that this product be removed from their shelves without delay.”