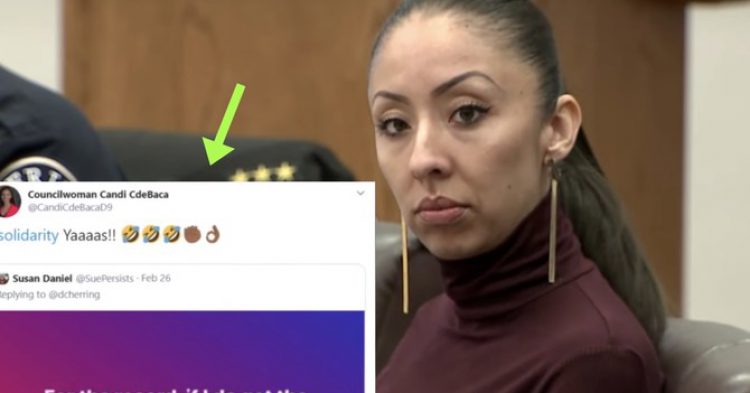 When a Democratic councilwoman came forward with her thoughts about Trump supporters and COVID-19, she made a controversial remark that has many people stumbling to get her to resign. Denver City Councilwoman Candi CdeBaca, who describes herself as a Democratic Socialist, responded to a tweet by Susan Daniel that read, “For the record, if I do get the coronavirus, I’m attending every MAGA rally I can.”

The councilwoman responded to this tweet with the word “Yaaas!” along with a series of laughing emojis to indicate that she found it funny. Because this woman was elected to a role in government, people were outraged that she would laugh at a threat of biological warfare like that – especially since COVID-19 can be deadly.

Because members of the Colorado GOP feel threatened by this, they have called for the Denver councilwoman’s resignation.

Michelle Threewits wrote on Twitter, “Any person that could wish harm or incites others to cause harm that could possibly lead to death has absolutely no business serving in any public position. Ever. She should apologize and resign. What a disgrace. Vote them all out.”

This opinion was mirrored by other members of the Republican Party as well as unaffiliated Trump supporters.

The executive director of the state GOP, Lx Fangonilo, released a press statement calling for the councilwoman’s immediate resignation.

“Councilwoman CdeBaca praising a social media post calling for Trump supporters to be infected with the coronavirus is simply disgusting. There can be no room in our politics for wishing harm on Americans who have different political beliefs. Democrats in Colorado and across the country need to condemn this evil statement.” 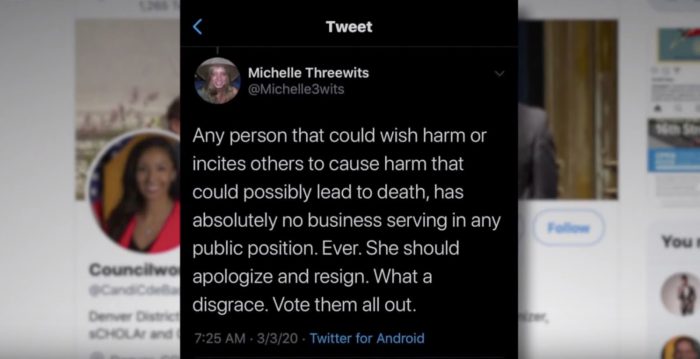 Daniel later deleted her controversial tweet. However, the councilwoman stood by her tweet because the Trump administration initially treated the COVID-19 pandemic as a “hoax” and did nothing to stop the virus from crossing over the United States border.

The councilwoman’s spokeswoman, Lisa Calderon, wrote that the tweet was meant to be a “sarcastic tweet… to call attention to the Trump administration’s downplaying of the coronavirus outbreak as a ‘hoax’ no more dangerous than the common flu.”

The spokeswoman also spoke to the Denver Post about the tweet, adding: “Rather than conservative outlets making a four-day-old tweet their focus on Super Tuesday, they should focus their energy on demanding a competent federal response to this public health crisis instead.” 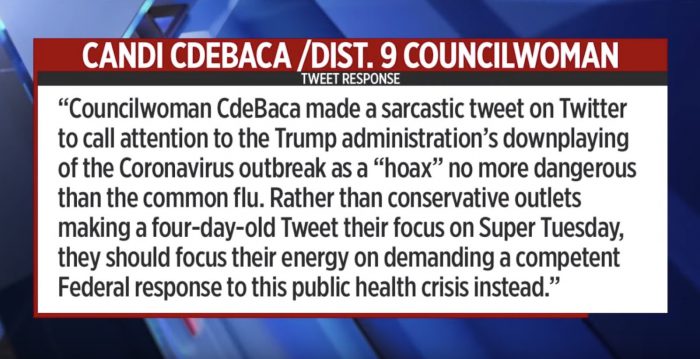 Because the Trump administration did not respond to the outbreak of the coronavirus in the United States until the World Health Organization labeled it an official pandemic, Trump has been taking a lot of flak for his inaction.

Following the World Health Organization’s plea to governments around the world to take the coronavirus outbreak seriously, Trump suspended travel from several European countries. But experts believe it is too little too late. The virus has already crossed over the border into the United States because of the administration’s slowness to act. Now it is spreading like wildfire among American citizens and killing innocent people.

What do you think about the Trump administration’s delayed response in dealing with this deadly virus?