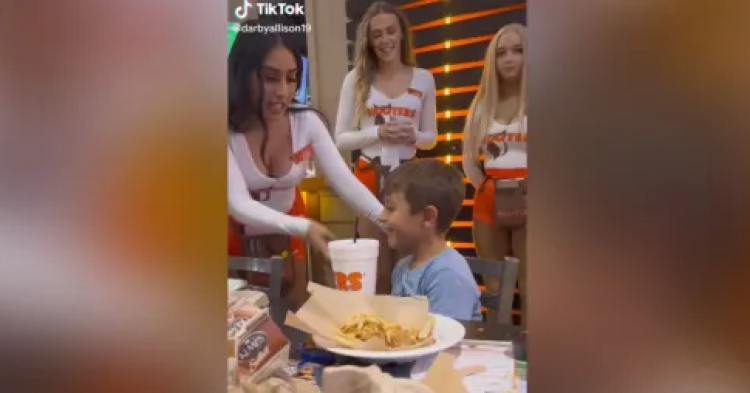 A viral video has taken the internet by storm. In the clip, a five-year-old boy is shown celebrating his birthday. While there is nothing unique about a child having a birthday party, this video has gone viral because his parents decided to take him to the sexy restaurant Hooters to ring in his fifth birthday celebration. The boy, Xander, was delighted to have scantily clad women serving his every whim for his birthday, including them taking out a cake for him with candles on it that he then blew out in front of the sexy servers at the Hooters location.

The boy’s mother, Darby Allison, shared the Hooters birthday celebration with her friends and followers on social media. The video has since been viewed more than seven million times as people from around the world share their shock and awe that Darby would take her son to Hooters to celebrate his birthday with women who are wearing tight-fitting clothes and exposing lots of cleavages.

Mom captioned her viral video, “Shouldn’t have told them it was your birthday, buddy.”

Once the sexy servers learned that the family had come to Hooters that day to celebrate his fifth birthday, they began to give the young boy lots of attention. The servers handed him a cone-shaped cup and told him to bite down on it so he could resemble the Hooters’ mascot, the owl. The girls also brought the birthday boy several dishes to celebrate his fifth birthday and told him to “flap his wings” while they sang him a rousing rendition of Happy Birthday that everyone in the restaurant could hear.

One waitress announced, “Attention, Hooters! This is my best friend, Xander. He’s turning five years old. Can I get a round of applause?”

Other customers joyfully clap for the five-year-old boy’s birthday. His parents are heard chuckling off camera where they manage to keep their faces hidden from sight since they knew what they were doing was rather controversial. As the Hooters waitresses sing happy birthday to the boy, he flaps his arms like they are wings and seems to be having a grand old time.

Many people online criticized the mom for taking her son to Hooters for his birthday.

One user commented, “who brings a child to Hooters? I’m not American, and I really don’t understand the whole Hooters thing.”

Another one noted, “Bro he’s five. What’s he doing in Hooters? Great mum and dad.”

Other people also took issue with the family’s choice of restaurants.

“So you took him to a ti ty restaurant? So much for protecting the children,” another one noted.

Although most people were critical of mom and dad for taking the boy to a restaurant where waitresses are known for their breasts and cleavage, other people were rather supportive.

“Former Hooters girl, here. This is so cute!!,” one user commented.

“I’m doing the same with my son!! So cute,” another one chimed.

What do you think about this boy’s birthday party at Hooters?