Dad Films Himself Trashing His Son’s First House As “Payback” 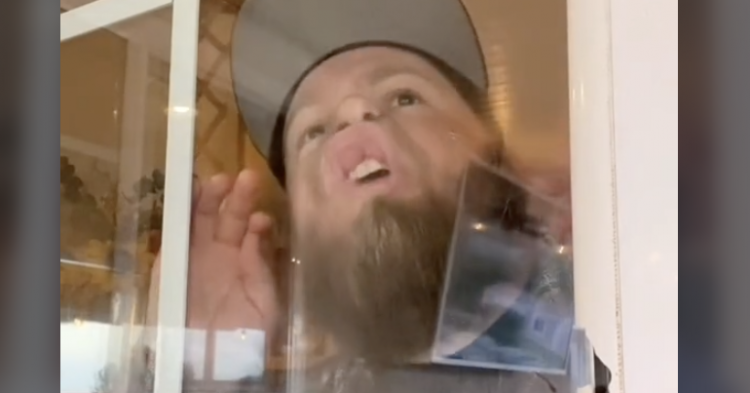 Chris Cluff is a father of six children. Because he is such a busy dad, he decided to share his everyday activities with the world via his TikTok account, @Chris.Cluff. However, one video he uploaded stands above the rest and has garnered more than six million views at the time of this writing. And part of the reason the video has become so popular is because Cluff was able to create something that millions of parents could relate to.

The video opens with Chris running amok. The idea behind the clip is that dad is going to trash his “son’s first house” because the boy has been such a headache at home. In the clip, Chris bursts through the front door of the property before climbing onto the dining room table and doing other destructive things like flushing a lot of toilet paper and slobbering on the windows.

However, dad was just making a point. The boy’s “first house” was none other than the father’s house. Because the boy is still very little, he lives at home and regularly messes up the Cluff household with his out-of-control antics and games.

Because the Cluffs are a family of eight, they have to constantly battle with issues of cleanliness. The six children are often making a mess even right after the house had been cleaned. The video struck a nerve with parents across the world because they feel that their cleaning job is endless when trying to keep up with young children.

Parents fell in love with Cluff’s video and were eager to share their responses to it in the comments. Thousands of people shared comments on Cluff’s video, including the following pointers to make the house even more of a mess.

“Open every soda and take two drinks. Leave the rest,” one parent wrote.

“You forgot to scatter Legos in hazardous places,” commented another user.

“Don’t forget to put empty boxes back in the cabinet or empty milk jug back in the refrigerator,” added another TikTok user.

“You forgot to turn the heat or air all the way up,” another user wrote.

“Sink wasn’t left running, and it looks like you got all the lights,” added another user.

“You forgot to flop on the sofa,” one parent wrote.

“Don’t forget to pile dishes in the sink without rinsing,” one parent wrote.

“Turn all the lights on in the house, leave cabinet doors open, leave the bread, peanut butter, and jelly on the counter,” another parent commented.

“I can’t wait to do this to my kid,” another parent joked.

“My mom came over and stole my car while I was asleep because I used to do that to her,” wrote one young woman.

“Absolutely one hundred percent of the things that will be happening at both of my kid’s houses. Crying…”

“Hiding the charger, though, is so accurate.”

What do you think about this dad’s payback?