Dad Has Been Secretly “Marking” His Twins, And Mom Is Not Happy About It 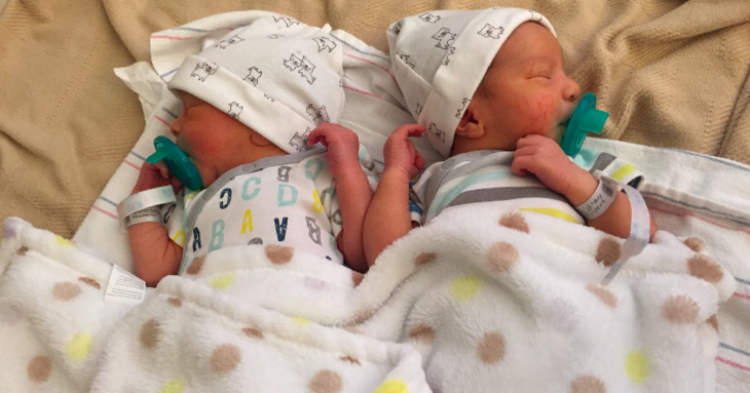 A new dad of twins was terrified that he would not be able to tell the little ones apart. Instead of letting his anxiety win, dad decided to mark the twins. He took a marker and placed a small shape on each child’s hand so he’d know who was who. Although dad thought nothing about the trick, the mother was furious that dad would put a marker on their twin babies and ripped him to shreds for doing so.

Now, dad has turned to Reddit for help deciding if he was right or wrong to mark his twins to tell them apart. Read through dad’s story and then share your reaction to it in the comments below.

“My wife gave birth to twins. Everything went great. I spent a lot of time at home with them, but ultimately I had to go to work after about two months. So I haven’t been around them as much as I would like. Here’s the issue. My wife makes them share clothes, so I have zero clue which is which by their outfit. They both look almost exactly alike, and I can’t figure out which is which. I asked if she would separate some clothes, but she said no because she thinks it is cute they share clothes.”

“Anytime I call one the wrong name, she gets mad and ignores me for an hour,” he added. “She spends all day with them every day, so she knows exactly which is which. I can’t do that.”

Because dad did not want to inspire wrath from the mother, he took a safe marker and used it to mark up the twins.

“I drew a little dot (with a safe marker) on one twin’s right hand and one on the other’s left hand, and I made sure to have the names right,” he explained. “It started to work.”

When his wife saw the dot and figured out what it was for, she became outraged at him. She flew off the handle and criticized dad for the move.

“She got really mad at me because I needed that much help figuring out our babies’ names,” he wrote.

Dad told the truth that he still needs help telling the twins apart.

“She spends all day with them. I do not,” he said.

But mom refuses to let the issue go. She’s holding a grudge over dad.

“She got mad and left the house,” he said. “A few days passed, and she’s still mad at me. Now I’m here wondering if I [expletive] up here. Was I an [expletive] here?”

On Reddit, most people agreed that dad should get a break.

“Your wife is going to have to get used to people messing up on identifying them until they get older,” one commenter wrote. “Rather than drawing on them, maybe there is something else you can do. But if she’s not willing to help you, IMO, she has no right to get upset.”

“Your wife is handling this terribly,” another added. “Of course, you would need help if you don’t get to spend as much time with them. That doesn’t make you a bad parent.”

What do you think about this situation?