Delivery Driver Smashed Their Food On Purpose, Then They Saw What Was Written On The Receipt 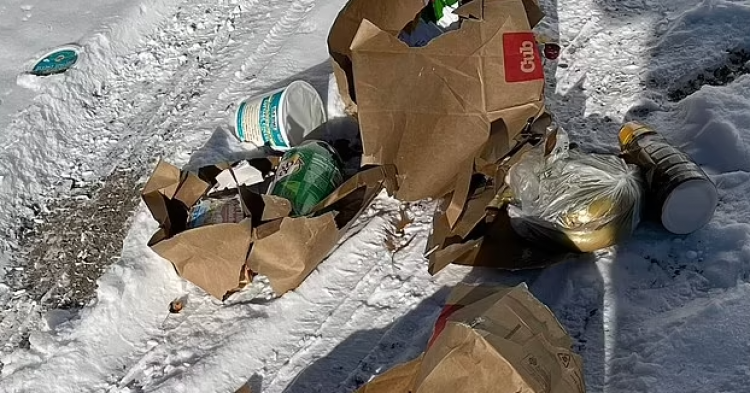 Life in Coons Rapids, Minnesota, is not easy for 36-year-old Tara Plum. As a liberal in a conservative part of the country, the purple-haired Plum has been able to find work as a driver for Instacart, which means she shops in various stores for people who pay her to do so. However, Plum became outraged when she noticed a pro-police Blue Lives Matter flag in the driveway of her next delivery, so she scribbled “F*** the police” on the receipt and smashed the grocery bags with her vehicle.

The groceries that were flattened were worth about $50. In addition to damaging the old couple’s food, she left the hateful note to let them know that she smashed the food on purpose after spotting the pro-police flag that declared, “Thank you, Blaine PD.” The groceries were delivered on December 6, 2021, from Cub Foods nearby. 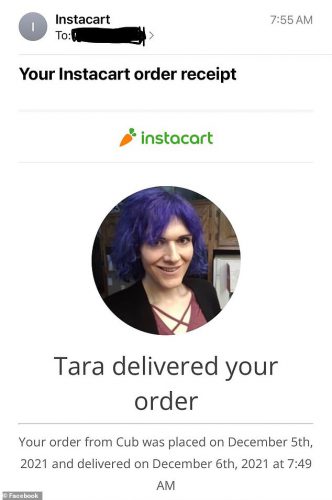 The elderly couple noticed the Instacart driver smashing their food. She even yelled at the couple before driving away and told them to look at the wreath on their front door for confirmation as to why she destroyed their order out of rage.

Plum wrote, “Instacart doesn’t pay employees. Sry [sic] find another slave. F*** the police,” according to the Blaine Police Department. She also called the elderly couple “racist pigs” for honoring those who serve in the police department and aim to protect their community.

Since the incident, Plum has been cited for criminal damage to the property. She could face as much as ninety days behind bars for what she did to the pro-police people in her community. Although a court date has not yet been set for Plum, she will need to appear before a judge and plead her case.

The couple has been reimbursed for their destroyed grocery items. Instacart has fired Plum from their roster.

Meanwhile, Blaine police officers are still investigating the incident. Blaine is located about seventeen miles outside of Minneapolis.

“We would have to prove the act was committed based on the victim’s perceived race, color, religion, sex, sexual orientation, disability, age, or national origin,” Captain Mark Boerboom said.

Plum is speaking out about the citation on Facebook.

“Disorderly conduct and property damage for running over Instacart groceries that I wasn’t paid to deliver, and the customer got reimbursed by Instacart, but somehow I damaged their property that they weren’t getting because the delivery person and shopper of the order didn’t get f***ing paid,” she said.

After Plum smashed the groceries and damaged them beyond use, she drove away from her next Instacart delivery in a huff once she realized that her customers were lovers of the local police.

Plum’s next stop was a nearby pizzeria where she planned to order food for herself.

The couple whose groceries were smashed called the police and told them about Plum, who has now received her second strike with Instacart after they notified the company of what happened. She is reportedly receiving counseling from an employee assistance program through Instacart, and she is also on a one-year probation from the company.

“I understand that what I did was wrong, and I’m sorry for my actions,” Plum said in an email to The Pioneer Press. “I let my anger get the best of me, and I shouldn’t have taken my frustration out on innocent people. This was a harsh reminder that I need to take responsibility for my actions and be more mature.”