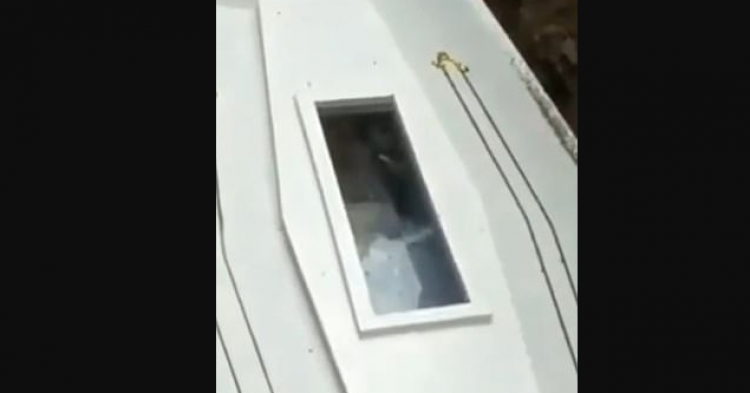 During a funeral service in Indonesia, mourners gathered around the coffin as it was lowered into the ground. Like most funeral services, those in attendance were sad and were going to sorely miss the person who was in the box being lowered into the ground. But unlike most funeral services, the corpse appeared to wave at the mourners around the gravesite of the Christian burial, which has sparked fears among the people at the funeral that the deceased might not have been dead after all but buried alive accidentally.

The burial took place in the city of Mando in North Sulawesi, Indonesia, last week on May 5, 2020. The family of the deceased had all gathered together despite the COVID-19 pandemic to pay their respects to the dead and their family. While the priest uttered a prayer over the casket, the outline of the hand and fingers could be seen moving from inside the coffin. Could the person truly be alive?

The priest recited, “God has said in the book of John. I am the resurrection and the life. Whoever believes in me, he will live even though he is dead.”

At this point, the hand of the deceased seems to press against the glass window in the coffin. People believed that the body was perhaps trying to escape from the coffin and reunite with family members standing around the gravesite.

Although the hand and finger appeared to be moving from inside the coffin, it is unclear if the footage was real or if anyone even checked to make sure the person was not accidentally getting buried alive. People who watched the clip online saw the movement from inside the coffin. Some believed that the person inside the casket moved while others think it was a small animal that had snuck inside and was trying to get out.

“Yes, he waved, maybe he was still alive and try to dig his way out,” wrote Yunita Ouwa online.

Although some people have claimed that the corpse was moving because it was still alive, others believe that it might have moved due to rigor mortis. These changes happen to the ligaments of the body during decomposition, so that was a natural process and not something supernatural.

Studies that have been reported in Medical News Today back in September 2019 indicate that the human body can move after death.

Researchers from Central Queensland University in Rockhampton, Australia, found the same thing. They observed that during the process of decomposition, the human body could change its position without “assistance” from a living source. Because of these findings, police and forensic investigators might need to rethink what happens after a crime of murder is committed. If the dead can move on their own, then a murderer or something else might have moved them after the death is finalized.

One person wrote on Daily Mail that there was no way this person was being buried alive.

“They weren’t buried alive, no one being buried alive would be politely waving at their friends and relatives knowing they were about to be covered with 6 feet of dirt. Decomposition is the cause, without a doubt. You’d be amazed just how much the deceased can and do move after death. It can be quite frightening if you’ve never seen it before.”