Everyone Is Going Crazy After Her “Quirky” Appearance On Jeopardy! 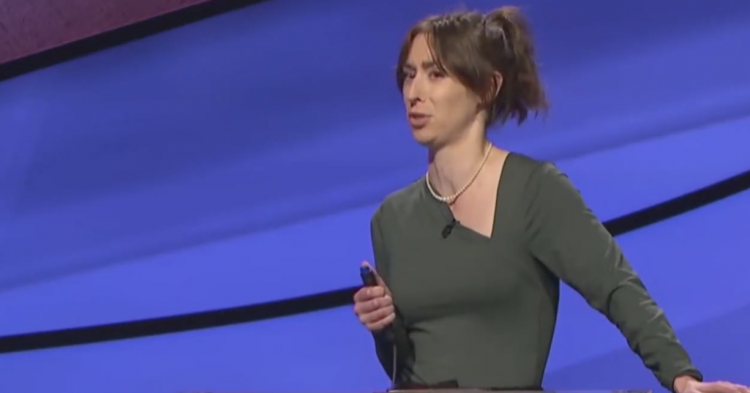 Few Jeopardy! contestants have been as loved or hated as Julia Markham Cameron. The young attorney from Brooklyn, New York, showed off her quirky personality during last week’s appearance on the popular game show. Although guest host Mayim Bialik laughed along with Julia’s funny facial expressions and mannerisms, fans were split on whether they found her endearing or annoying. Thousands of people flooded social media with comments about how much they either loved or hated her.

Julia Cameron was very successful on the show. She won the game after a great game and even got the Final Jeopardy! clue correct. She may have outraged half of Jeopardy! fans, but she will be making at least one more appearance on the game show due to her victory.

Julia fans flooded Twitter and other social media platforms with comments like “I am LIVING for Julia’s facial expressions” and that she was “a breath of fresh air.”

However, other fans found Julia to be annoying and distracting. They felt that her reactions took away from the progress of the show since she was spending time between questions getting her reactions out to the public.

Yahoo Entertainment ran a report on Julia’s social media popularity. They confirmed that Jeopardy! fans were split on their love and hate for the new champion. Dozens more commented on Julia’s appearance in the comments on the Yahoo article. The following is a selection of what people had to say about her on the show.

“I thought she was cute,” one man wrote. “Kind of reminded me of Marisa Tomei in My Cousin Vinnie, without the wild accent.”

“I found her refreshing and charming,” another Jeopardy! fan wrote. “For a knowledgeable contestant, she was often surprised, delighted, and disappointed with the results and showed it with her face and body language. In other words, she wasn’t robotic.”

“Well, I think she is cute, and I liked her quirkiness. A breath of fresh air.”

“I loved her! I thought she was hilarious!”

Although most people loved Julia’s quirkiness, some people admitted that it rubbed them the wrong way.

“I guess I’m in the minority. I found her annoying. Oh well, to each their own.”

“She was kind of cute … but I wouldn’t hire her if I needed a lawyer.”

One person suggested that all of Julia’s haters need to take a moment to do some self-reflection. It’s easier to answer Jeopardy! clues at home than it is with all the pressure of being on stage in front of the cameras.

“Which of us Jeopardy fans can actually answer most of these questions with enough confidence to actually push the buzzer? Sitting at home, yeah, we belt out answers as giving wrong answers has no consequence. Doing it live on national television, where wrong answers get you negative? I bet most of us would freeze (thus why most of us don’t apply for the show). Way to go, Julia!”

Did you enjoy watching Julia Markham Cameron’s appearance on Jeopardy!? (If you missed it, watch the video below for a sneak peek.)