Family Dog Annoys Mom By Interrupting Her Shower, Then She Realizes Why 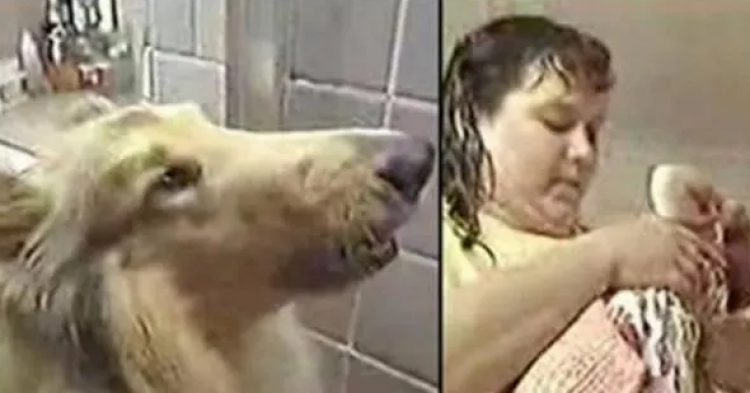 Mindi and Ron Wynne adopted their two-year-old collie, Papillon, from a local pet shop. They adored the animal as soon as they saw him, and they were eager to sign the paperwork so they could take him home and make him part of the family. However, Papillon was not the dog they thought he was. As soon as he got back to their house, he started causing all sorts of trouble that both Mindi and Ron did not want to tolerate.

“Papillon had developed some habits that we were not particularly fond of,” Ron said, according to Little Things. “He chewed up furniture, and he literally ate the couch.”

“He was really becoming a terror, and we thought it might have been jealousy from the baby,” Mindi said.

In addition to their fur baby, Mindi and Ron also have a five-week-old daughter. One day, Mindi put the infant down for a nap and left the room to go take a quick five-minute shower while she had a moment of peace. As if on cue, Papillon rushed over and started interrupting Mindi’s moment of peace and quiet.

“The dog started barking, and I didn’t think anything of it because he barked all the time,” Mindi recalled.

Mindi tried to focus on the sound of the falling water and ignore the dog’s blaring bark. However, Papillon was determined. He broke into the bathroom and barked even louder to get Mindi’s attention.

“I believe that animals do communicate with us,” she said. “I used to watch old Lassie TV shows, and I figured he was trying to tell me something. I didn’t know what.”

At this point, Mindi got a bad feeling. She turned off the shower and dried off quickly. Then she followed Papillon to her daughter. Rachel’s room to make sure the infant was doing all right.

“He ran around in circles to put his paws up on the crib, and when I looked in at Rachel, she was blue around her lips,” Mindi said. “I knew something then was very wrong.”

Mindi, who happened to be a trained medic, immediately called 911 to alert authorities to the emergency. While she waited for emergency services to arrive at her Ohio home, she performed CPR on the dying infant.

“He ran around in circles to put his paws up on the crib, and when I looked in at Rachel, she was blue around her lips,” Mindi said. “I knew something then was very wrong.”

“I covered her mouth and nose and just started puffing,” she explained.

Amazingly, Rachel began breathing again. When the ambulance arrived, the paramedics checked her over and rushed her into the truck to transport her to a nearby hospital for a full checkup. Doctors learned that the baby had a weak muscle between her stomach and esophagus that caused food to get lodged in her throat so that it cut off her airway.

Now, Mindi looks at Papillon a little differently. Before he saved her daughter’s life, she was prepared to send him to the pound. Now, she doesn’t think she could live without him.

“I don’t think there’s any question that if Papillon hadn’t alerted Mindi when he did that, we would not have Rachel with us now,” Ron admitted.

“He knows that he’s very special,” Mindi said of Papillon. “I don’t think there’s enough dog treats or biscuits or presents. There’s not enough in the world to express the gratitude I have for Papillon.”