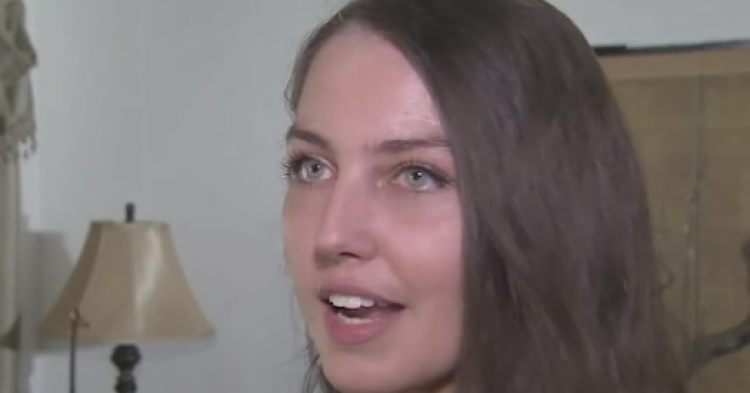 Server Liz Woodward loves her job at the Route 130 Diner in New Jersey. She gets to serve all types of customers, many of whom are often in a rush to get on with their day after eating breakfast. During one routine shift, Liz Woodward was serving a pair of firefighters named Tim Young and Paul Hulling when she overheard them talking about how they had been forced to work putting out a warehouse fire that had raged all night during their overnight shift.

Since Liz Woodward wanted her firefighter customers to feel comfortable during their visit to the Route 130 Diner, she decided to do something generous for the pair of heroes. Liz paid for the firefighters’ breakfast and surprised them with the settled bill at their table. When the firefighters saw that their server had paid for their breakfast, they were surprised and delighted by the generous move. 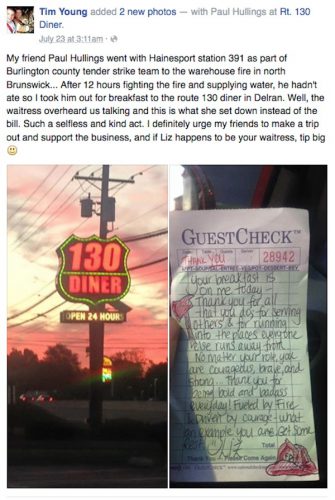 On the back of the receipt, Woodward wrote: “Your breakfast is on me today. Thank you for all that you do, for serving us, and for running into the places everyone runs away from. No matter your role, you are courageous, brave, and strong. Thank you for being bold every day. Fueled by fire and driven by courage – what an example you are. Get some rest!”

Firefighter Tim Young snapped a photo of the waitress’s generosity and shared a clip about it on Facebook while tagging his friend Paul Hullings as well as the Route 130 Diner in New Jersey.

“My friend Paul Hillings went with the Hainesport station 391 as part of Burlington County tender strike team to the warehouse fire in north Brunswick… After twelve hours fighting the fire and supplying water, he hadn’t eaten so I took him out for breakfast to the Route 130 Diner in Delran.” 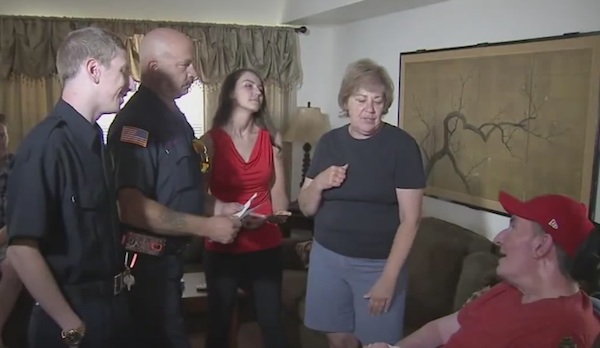 Firefighter Tim Young continued his soon-to-be viral social media post with: “Well, the waitress overheard us talking and this is what she set down instead of the bill. Such a selfless and kind act. I definitely urge my friends to make a trip out and support the business, and if Liz happens to be your waitress, tip big.”

In addition, Young learned something about Woodward – she was in the process of raising money to afford a wheelchair-accessible van so she could transport her paralyzed father to front doctor’s appointments and other meetings.

Because the firefighters wanted to pay it forward to their generous server, they recruited the help of more than two hundred people who all donated their hard-earned money toward a fundraising campaign for the wheelchair-accessible van.

Woodward could not believe that her simple generosity of paying for the firefighters’ meal would be repaid more than ten-fold by generous strangers who heard about her good deed. She had posted a goal of raising $17,000 to help afford the van but was blown away by the generous support of hundreds of people who gave more than $56,000 toward her goal in just three days’ time.