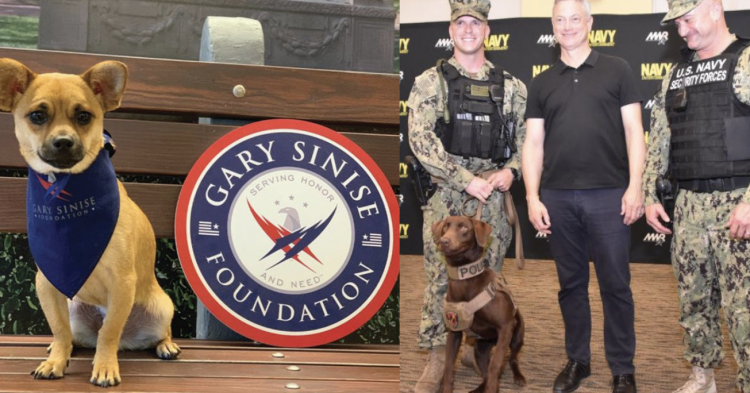 Although most people know actor Gary Sinise for his role as Lt. Dan in Forrest Gump as well as his role in CSI, New York, veterans, know Sinise as a generous giver. For years now, Sinise has been making sure America’s veterans, who are often under-served after risking their lives during their years of service, are given a fair chance at a good life.

Veterans deal with a lot of problems when they get back from their years of dedicated service. They are often slammed with symptoms of post-traumatic stress disorder and other mental health problems that can lead to destitution like homelessness or even violent spree-shootings that have killed dozens of Americans every year.

Recently, Sinise has created a new foundation called Veterinarians for Valor. This charity has helped police and military dogs live longer and healthier lives. While animals have usually been seen as a sidekick or a support group for men and women in the line of duty, Sinise felt that these canines were left out of the story.

Veterinarians from Texas A&M University’s College of Veterinary Medicine and Biomedical Sciences have teamed up with the Gary Sinise Foundation, so police dogs and military dogs can get free health care to these service dogs. Because these dogs help veterans and police officers so they can do their job more safely, Sinise felt that it was important to care for these animals. These animals help first responders and military personnel stay safe and do their job better. Isn’t it time that the military and police departments take care of these dogs? That’s when Gary Sinise felt was missing.

Gary Sinise Foundation posted the following message on Facebook a few months ago:

“On Warrior Wednesday, we recognize military working dogs who have served alongside US troops since WWI. From the fields of France, the jungles of Vietnam to the mountains of Afghanistan and the streets of Iraq, military working dogs have been employed to sniff out explosives and drugs, detect enemy forces, search and rescue missing service members, and provide therapeutic relief. We honor the service and sacrifice by these highly trained canines and their handlers whose contributions have saved countless lives and led to mission success deployment after deployment.”

Here’s a follow up about what The Gary Sinise Foundation is doing:

“Sinise is adding heroic canines to the list of people he’s inspired to help. That is how he came up with ‘Veterinarians for Valor’ in order to help raise money and honor the wonderful dogs who are veterans as well. For this new endeavor, veterinarians from Texas A&M University’s College of Veterinary Medicine and Biomedical Sciences have partnered up with the Gary Sinise Foundation in order to provide free medical care for police K-9s, as well as service dogs who aid first responders, veterans, and those in the US military. Lieutenant Dan for the win! Well-known actor and director Gary Sinise, has created a wonderful initiative that was meant to bring veteran canines to the forefront on Veteran’s Day, and honor them as well for their service.”

What do you think about this initiative?