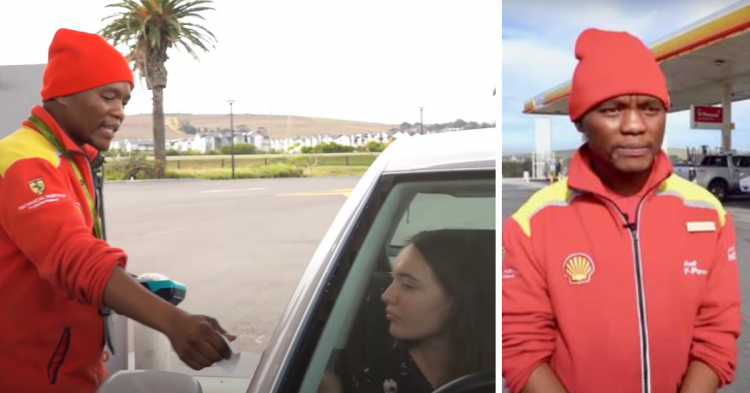 Monet van Deventer was driving through Cape Town, South Africa, when her car alerted her to low fuel. She quickly tried to find the nearest gas station in the African city but barely made it in time. When she reached for her purse to pay for the gas, she realized that she did not have any cash or credit cards on her. With no money and no gas, she found herself stranded in a strange land with no one to help her.

“I had this strange feeling that I forgot my card. I then started looking for it, and while I was searching, Nkosikho started washing my windows,” van Deventer said to Times Live.

When the gas station attendant walked up to Monet’s car, ready to fill it up and wash her windows, she had to stop him.

Fortunately, the gas station attendant had a big heart. The man, who was named Nkosikho Mbele, listened to Monet’s story and decided that he was going to help her out of her predicament.

“I said to him, thanks for washing my windows but I can’t put petrol in today. He seemed stressed and shocked because he was looking at my fuel needle, which was already in the red,” she added.

That’s when Mbele offered to cover Monet’s cost of gas so she could get off the highway and find her place somewhere safe. With such a generous offer, Mbele filled up her tank with a few dollars of gas and helped the 28-year-old traveler back on her way. He paid for the gas with his own card.

At first, Monet thought that Mbele’s employer, Shell, would cover the cost. However, she soon realized that he was giving his own money out of the kindness of his heart.

“I thought, perhaps it was a business thing that Shell does this for you, and then I saw him literally take his own card and pay for it. When I drove away, it dawned on me what just happened.”

As it turned out, Mbele paid nearly a day’s worth of salary to help Monet get back on the road. She came back to repay him as soon as she could.

After Monet shared her story on Facebook, she found many people eager to pay it forward to Mbele. She launched a fundraiser and soon amassed a fortune for the Cape Town gas clerk.

In the end, Monet’s fundraiser collected about $94,000 for the gas station attendant. His kindness was repaid in spades.