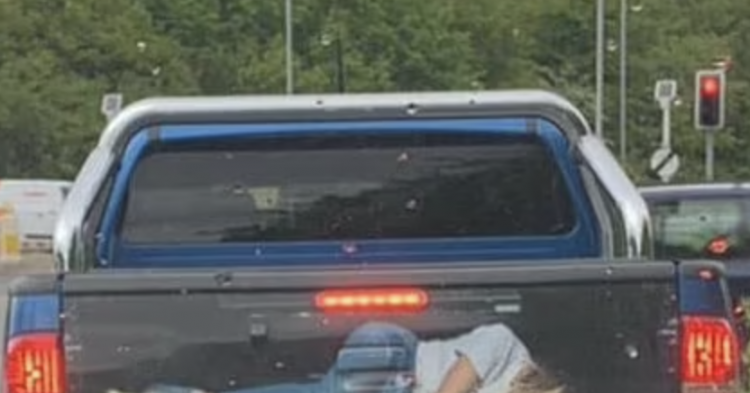 Police have launched an investigation into the pickup truck owner who painted a kidnapped woman to appear like she was trapped in the bed of his truck. Now, police in Norfolk, UK, are on the hunt for the man and are looking into possibly charging him for a hate crime because the “artwork” shows a woman being abused because of her gender.

The image depicts a blonde woman bound and trapped in the back of the man’s pickup truck. Other motorists were stunned to see the shocking image on the back of the truck and reported the heinous image to the local police. The truck was first reported to the cops when it stopped at traffic lights on the junction of the A47 and A146 roads at Trowse, near Norwich, Norfolk, according to a breaking news report from Daily Mail. 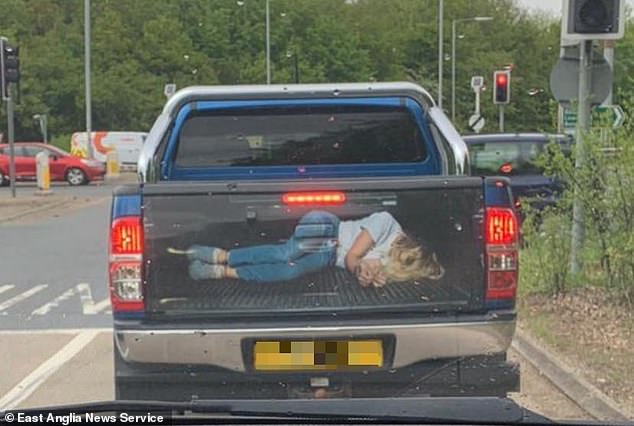 Norfolk Police are taking the threat seriously. They are investigating it as a potential hate crime.

A police force spokesperson said, “A woman reported seeing a blue pickup truck with vinyl printed on the back of the truck showing a woman being tied up, blindfolded, bound as if being kidnapped. Inquiries are ongoing.”

Police are not the only ones who are outraged by the “art” on the back of the blue pickup truck.

Sophia Forte, a graphic designer, was so offended by the image of the kidnapped woman that she shared the picture to the Facebook group, Reclaim These Streets Norwich.

“This was spotted in Norwich,” she wrote about the image. “Not okay to normalize violence against women. Then people wonder why we have so many issues with it.”

Forte added: “I’m a graphic designer, and from a designer’s perspective, my job is to educate and inspire, and it is sickening visually to think that someone has designed this, and in my opinion, it is normalizing violence, abuse, threat and control over women. It makes me sad that someone that is a designer has abused their power to create something like this. We need to calm people and stand up, not alarm.” 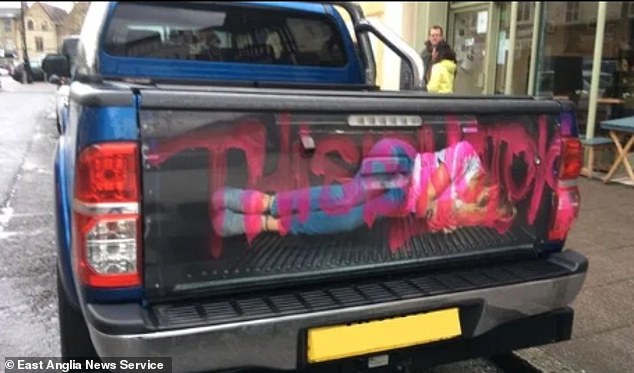 Police are investigating the paint job as a potential hate crime because of what Forte described. The image normalizes violence against women and celebrates the idea of kidnapping a young woman and keeping her prisoner while driving across the UK.

Many Facebook users shared their outrage at the image, calling it “vile” and “horrifying.”

“I have never before seen anything like this on a vehicle,” one person wrote. “I am shocked. It is beyond disgraceful. I really hope someone reported the driver and that there is something that can be done about it.”

Another user in the Facebook group said, “What the f*** is wrong with people? How can that ever be funny?”

Jasmine Reeves, a community campaign worker, described the image as “disturbing.” She added, “This is not okay. I do not want to see it and attempt to explain it to my five and ten-year-old boys. It’s no wonder that women do not feel safe in this world.”

Do you think this image should be investigated as a potential hate crime?