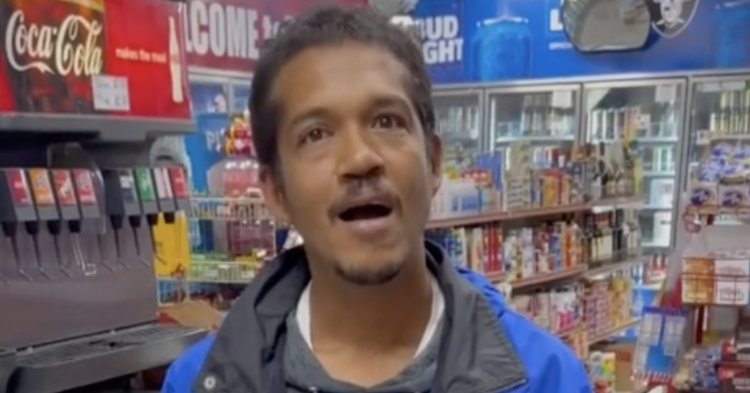 Throughout the pandemic, Akram Mohsin has used TikTok to document his time working at a Fresno, California gas station. The station clerk uses the Chinese-created social media platform to share his connections with various customers and to show off how much fun he has while on the job. However, over the last few weeks, Mohsin’s videos have inspired people as he reveals how he has been helping a desperate homeless man get the basic necessities he needs to survive the grueling economic collapse brought on by the coronavirus pandemic.

As Mohsin shares his interactions with some of the gas station customers – many of whom are homeless – people have given Mohsin money so he can forward the cash to those desperate Fresno residents in need.

One such lucky homeless man was Salvador Tafi Saha Jr. On December 12, 2020, Mohsin shared a video on TikTok where he uses his last bit of money to purchase a gas station dinner for himself and his two daughters—although the meal for three costs less than six bucks, it was all Saha had left in his possession, which broke Mohsin’s heart.

In addition to the food, the homeless man also wants to buy Black and Mild cigars so he can keep up his fix. He also tells the gas station clerk that he needs to go to the government building to get a new identification card so he can get his life back and get off the streets of Fresno.

However, Mohsin reveals that Saha is about to get a lot more than he bargained for.

The homeless man appears to be stunned. Once the shock wears off, he immediately thanks Mohsin for his generosity and then praises God for helping him in his moment of need.

A few days later, Mohsin shares another TikTok video where Saha comes back to the gas station with his ID in his hand. This proves that the man used the money as promised and got the card that he needed to get his life back on track.

In another video, Saha details his plan to put his homeless life behind him. Mohsin then surprises the man with even more cash. This time he hands the guy $200, which was contributed by TikTok users far and wide.

What do you think about this heartwarming interaction? Do you think this homeless man is putting the blessing to good use?