I Never Thought They Were Real, But This Video Proves White Giraffes Exist : AWM

A pair of extremely rare giraffes have been spotted in a remote conservation area in Kenya. The giraffes have a condition known as leucism, which limits the amount of pigments in the animal’s skin cells. Because of this condition, the giraffes have a white appearance, which is an extremely rare sighting for these majestic animals of Africa. Locals and conservationists alike are delighted to know that these rare giraffes are in the East African country of Kenya – and their sighting may cause more people to come out to see if they can spot them.

The giraffes, which are a mother and her child, have the genetic condition that affects the pigmentation of their skin. Although you may assume that these giraffes have albinism, the condition is different. Animals with leucism have skin cells that continue to produce darker pigment, but not to the extent of a normal animal. That’s why the animals have dark eyes and several other features. 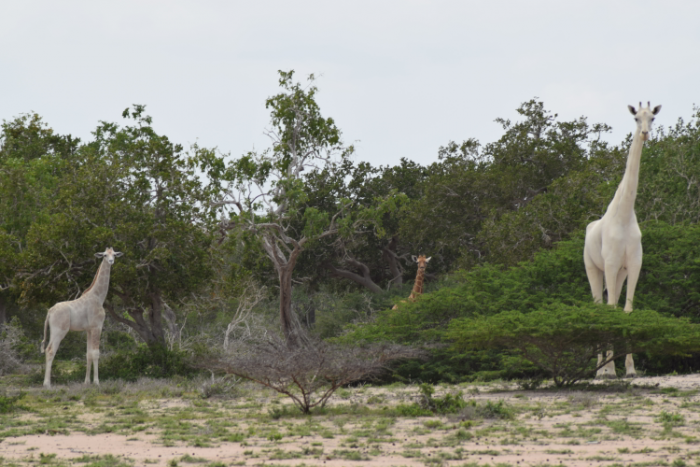 Local residents were the first to notice the amazing specimens. They told animal conservationists about the giraffes before poachers could swoop in and try to steal them away from the world for short-term gain. The giraffes are currently living in the Ishaqbini Hirola Conservancy, which is located in Kenya’s Garissa county. This area is managed by a nonprofit organization called the Hirola Conservation Program. The group is dedicated to preserving the critically endangered hirola antelope, which is a very rare animal, one of the rarest in the world.

The nonprofit group wrote a blog post about the white giraffes, which they said were first reported to rangers by locals back in June.

“They were so close and extremely calm and seemed not disturbed by our presence. The mother kept pacing back and forth a few yards in front of us while signaling the baby giraffe to hide behind the bushes.”

White giraffes like this pair are extremely rare. According to the African nonprofit, this is only the third known sighting of white giraffes in the wild. Prior to this sighting, a white giraffe in the same conservancy area was reported in March 2016. In Tanzania, the neighboring country to Kenya, another white giraffe of the Masai variety, was spotted in Tarangire national park back in January 2016. 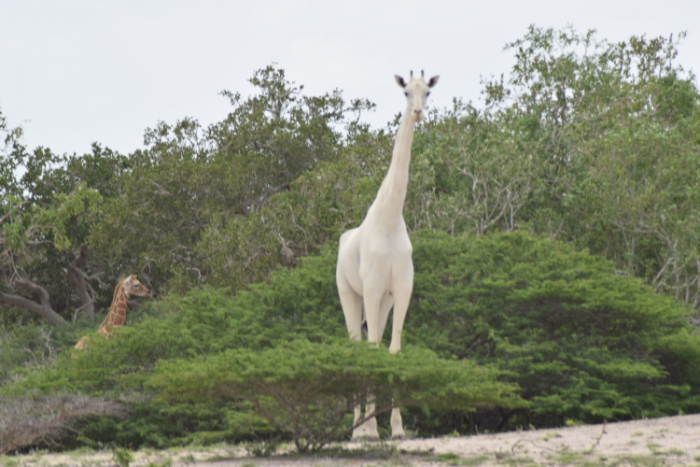 Reticulated giraffes are vulnerable creatures. There are only 8,500 estimated individuals living in the wild. They call Somalia, southern Ethiopia, and northern Kenya their home.

The nonprofit’s blog post went into great detail about the beautiful white giraffe.

“While observing the magnificent long-necked animal looking at us, I could not, but help see the fading reticulates on their skin! It was evident that the coloration, especially on the mother giraffe, was not as conspicuous as the baby. The question that lingered in my mind was if the fading on the skin was something that happened at birth or thereafter in the adult giraffe life?”

That mystery was solved when it became clear that these giraffes had leucism, a genetic condition.

What do you think about the images of these rare white giraffes?