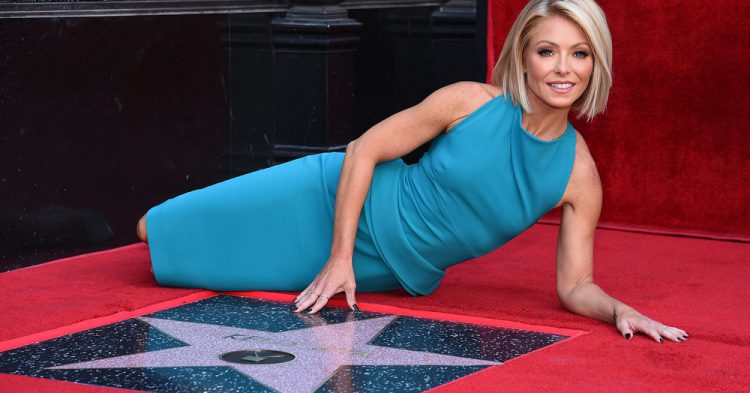 Kelly Ripa did not skyrocket to fame because she was shy. On the contrary, the host of Live with Kelly and Ryan is bold beyond belief. She’s willing to take a chance and put herself out there – and she’s also willing to show off her all-star dance moves. In a recent video upload to her Instagram, Kelly Ripa showed off just how well she can dance by posting her response to the Shakira dance challenge.

Not only does Kelly Ripa have dance moves for days, but her family was also able to keep step with the superstar daytime talk show host. The video, which was captioned with the words, “WCW with my sisters in the Shakira Champeta challenge. Three mothers. Seven children. Thirty-six pack.”

Kelly was joined by two friends Elsa Collins and Anna Kaiser, in participating in the Shakira dance challenge that has been sweeping the internet in recent weeks. The dance routine, which was choreographed to “The Water Dance” by Chris Porter featuring Pitbull, showed off the incredible dance moves of Kelly Ripa and her posse.

Many people are jumping onto the dance challenge because Shakira delivered an amazing performance during the Super Bowl halftime show along with actress and singer Jennifer Lopez.

Kelly Ripa has been a fan of Shakira and her music for a while, which was why she was excited to see that Shakira would be performing during the halftime show. Before the Super Bowl even aired, Kelly and Anna posted a video in which they joked about how they were auditioning to be included in Shakira’s dance troupe for the show.

In the humorous video, the two women danced to Shakira’s first English hit, “Wherever, Whenever” and proved that they had dance moves for days. They wrote the following caption for that video performance.

“Answering the call for the she-wolf Shakira Super Bowl audition halftime,” Kelly wrote, along with the corresponding hashtags to get as much engagement as possible from her thousands of fans.

Ripa shared the video of her take on the Shakira dance challenge on the same day that she revealed a story about her husband, Mark Consuelos, surprising her outside of the gym.

“I left the gym, and he’s standing outside of the gym. I have my earbuds in, and I hear, ‘Hey sexy.’ And it’s so funny. It never occurs to me that this person is talking to me, but it sounds too close. And I was like, ‘I’m about to be mugged by somebody flirting with somebody, who doesn’t even have the thoughtfulness to pay attention to me while they’re mugging me!’ So I look up, and my husband is there. And he was talking to me as it turns out. He had flowers for me, and he said, ‘I have to tell you something. It dawned on me as I was flying home. Today is 26 years to the day since we met.’ Isn’t that crazy?”

Although Kelly Ripa may be known for her daytime talk show career now, she has a lively life as a dancer and actress.

What do you think about her dances moves in the Shakira dance challenge?