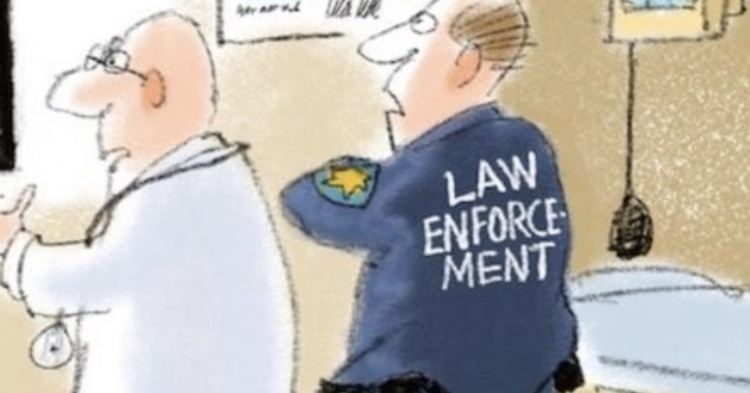 When the law enforcement community responded to the Black Lives Matter movement with its own counter slogan, Blue Live Matter, the community was accused of practicing white supremacy. Now, political cartoonist, Pat Bagley, has sparked controversy with a cartoon featuring a law enforcement officer and his primary care physician. The cartoon, which has spread across the world, was entitled “The Deep Hate,” and was printed to great controversy in the Salt Lake Tribune.

The cartoon shows the police officer speaking to his doctor about a recent X-ray. In the X-ray, the cop’s skeleton has a Ku Klux Klan hood. When the doctor sees that the officer is a secret white supremacist, he declares, “Well, there’s your problem.” Although law enforcement officers and agencies are furious with the political cartoon, the Salt Lake Tribune released a statement two days after the cartoon’s publication declaring that they were standing by their cartoon in the hopes that it could inspire some readers to “resolve to take appropriate action” against the culture of white supremacy in America. 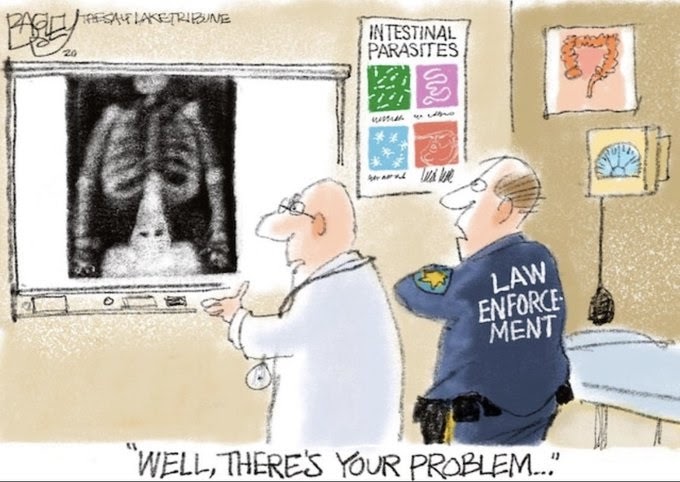 Although many newspaper readers were supportive of the political cartoon and found it funny, Sevier County Sheriff Nate Curtis, the president of the Utah Sheriffs’ Association, was furious. His team wrote an open letter, calling the cartoon a “hand grenade” that would only cause more problems during this troubling time. 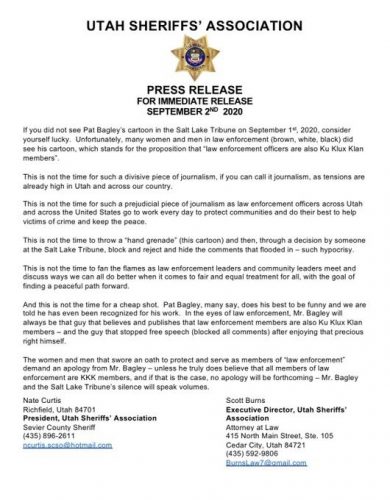 “This is not the time for such a divisive piece of journalism if you can call it journalism, as tensions are already high in Utah and across our country,” the sheriff wrote. “This is not the time for such a prejudicial piece of journalism as law enforcement officers across Utah and across the United States go to work every day to protect communities and do their best to help victims of crime and keep them. This is not the time to throw a ‘hand grenade’ (this cartoon) and then, through a decision by someone at the Salt Lake Tribune, block and reject and hide the comments that flooded in – such hypocrisy.”

Curtis added, “This is not the time for a cheap shot.”

Other police organizations, which are the target of the political ad, lashed out at the cartoon.

The Fraternal Order of Police wrote, “The corporate-sponsored mob loves the cartoon, and we are sure he will be nominated for another award.”

Apparently, the cartoon was posted on the seventh anniversary of the death of Draper Police Sgt. Derek Johnson. 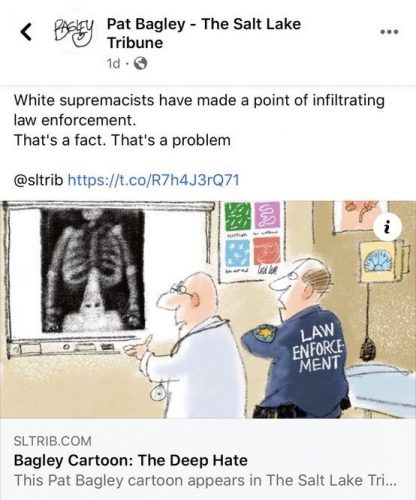 Curtis wrote, “Pat Bagley, many say, does his best to be funny, and we are told he has even been recognized for his work. In the eyes of law enforcement, Mr. Bagley will always be the guy that believes and publishes that law enforcement members are also Ku Klux Klan members – and the guy that stopped free speech (blocked all comments) after enjoying that precious right himself.”

Although he has been heavily criticized for the cartoon, Bagley defended it on Twitter.

“The cop in the cartoon is in for a check-up because he felt something was wrong. White supremacists have made it a point to infiltrate law enforcement. That’s a fact. That’s a problem.”

Then he confirmed that he “went to some pains to show that not all police are racist.”