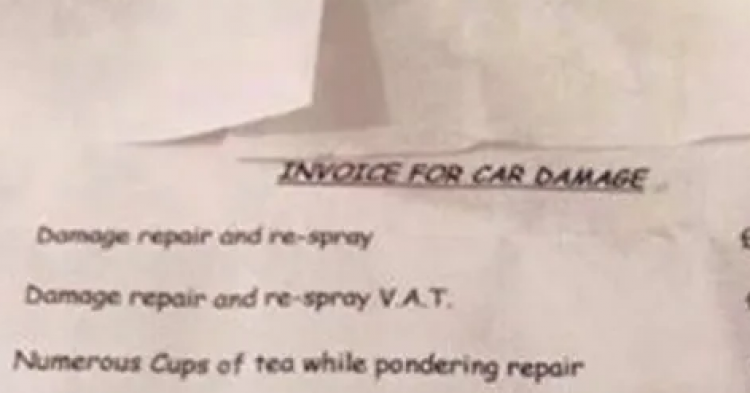 Random acts of kindness can have a big impact on her days. If someone does something nice – like paying for your coffee at Starbucks or stopping by the roadside when your car breaks down – it can put a smile on your face. However, after a three-year-old boy dented a neighbor’s car, the child’s parents quickly confessed and offered to pay the repair bill for the vehicle – however, the car owner did something entirely unexpected that left the child’s parents absolutely inspired.

The incident occurred in the United Kingdom, so the neighbor provided an invoice to the parents in British pounds. 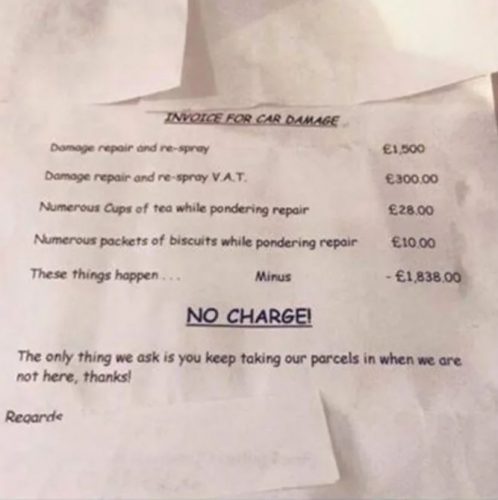 The invoice said the following:

At the end of the letter, the neighbor wrote, “The only thing we ask is you keep taking our parcels in when we are not here, thanks!”

Clearly, these parents are living next door to some Good Samaritans. They were willing to look the other way when the toddler dented the car door. That’s a sign that these are some good people to be living next to. 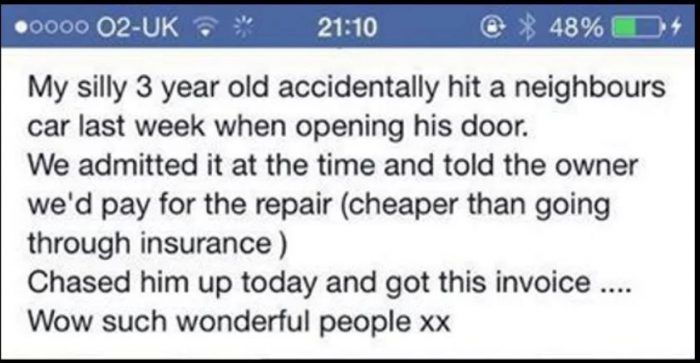 The little boy’s parents shared a photo of the invoice to social media along with the following message: “My silly three-year-old accidentally hit a neighbor’s car last week when opening his door. We admitted it at the time and told the owner we’d pay for the repair (cheaper than going through insurance). I chased him up today and got this invoice… Wow, such wonderful people.”

The internet can be a cruel place sometimes, so it’s nice to see that there are still good people out there. In this case, the person who dented the car was just three years old! The boy clearly didn’t mean any harm and probably doesn’t even understand what he did wrong yet – but his parents quickly took responsibility and made sure to offer to get the car fixed.

The next time something happens where you think, “oh no!” – just remember that there are people out there like these neighbors who will make your day a little bit brighter with their kindness.

One day, these neighbors will likely be repaid for their wonderful gesture – and it may not even come from the people they helped.

It’s a good reminder for all of us to try our best to do kind things for others whenever we can because you never know what that person is going through or how much your simple act could mean to them.

The Facebook post went viral as more people began to realize how kind these neighbors truly were. Because they were willing to look the other way when the toddler damaged their car, they inspired people across the globe with their good hearts and kindness.

What do you think about the way these neighbors handled the situation? What was the last good deed you did?