Little Girl Calls Her Awkward Dad To The Dance Floor. Then He Steals The Show 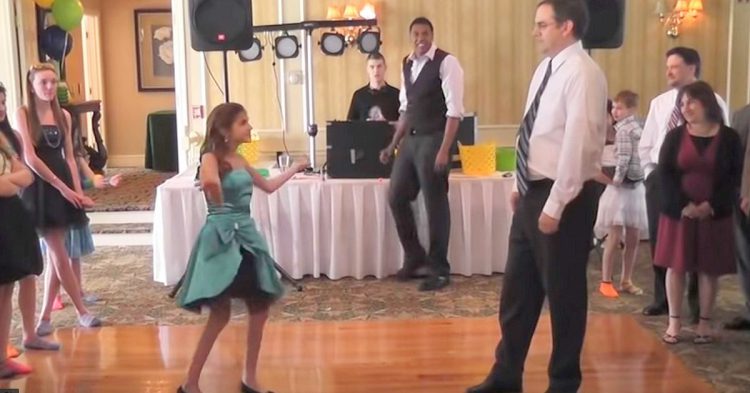 Guests at Jessica Hanley’s bat mitzvah knew they were in for a great time. Not only had the event been hyped up for weeks at school and among friends, guests knew how passionate Jessica was about music and having a good time. However, few guests knew that Jessica’s dad was as much a music nerd as his daughter if not even more so – that’s why people were amazed and taking out their phones when they watched what this daddy-daughter duo had planned for the guests at the celebration.

As it turned out, Jessica and her dad Mike spent weeks, if not months, preparing for the bat mitzvah. They practiced tirelessly learning dance moves so they could WOW the people at the party. However, they knew that if they were going to surprise everyone, they had to take them off guard. That’s why they started their dance with “My Girl” by The Temptations. This allowed them to do a boring slow dance, which would be blown away as soon as the next song blasted through the speakers.

While everyone was warming up to “My Girl,” and even singing along to the lyrics, the DJ switched up the track and put on Whitney Houston’s famous hit “Do You Wanna Dance?” and that’s when things started to get very interesting.

However, they weren’t even done after that. As Faithtap reported, they cycled through Lou Bega’s “Mambo No. 5”, LMFAO’s “Party Rock Anthem,” Jackson Five’s “I Want You Back,” Lady Gaga’s “Poker Face,” “Greased Lightning” from the movie, Grease, and “Thriller” by Michael Jackson. As they wrapped up their stellar performance, 50 Cent’s “In Da Club” blasted from the speakers before the daddy-daughter duo brought it back to the first song, “My Girl.”

Does Mike Hanley sound like someone you know? Well, he was the dad in this video, and as it turns out, he is also a professional comedian. You might have seen him perform a stand-up routine because he has been doing it since 1989 – how else do you think they paid for this party?

However, Mike gave up comedy in 2000 when he decided to do the “family thing” full time. But he couldn’t give up comedy completely. Although he had three daughters to raise, he went back into comedy in 2011. While his wife works, Mike has been performing for small crowds in malls and comedy clubs trying to get his name out there.

If you’re ready to have a good time, check out this video from Jessica’s bat mitzvah.

The video has since garnered 21.6 million views. The family has disabled comments on the video so as not to hear anything untoward about the daddy-daughter duo. However, most people find it endearing.

According to Hanley’s website, “Mike Hanley’s unique style of high energy, full-tilt comedy has left audiences all over erupting in laughter. If you are married, you will laugh at Mike’s hysterical stories. If you are single, you will want to stay that way for the rest of your life. From relationships to kids to the day to day grind, Mike has a story that will be sure to have you on the edge of your seat. There is no mistaking Mike’s trademark intensity the minute he hits the stage.”

What do you think about the video?