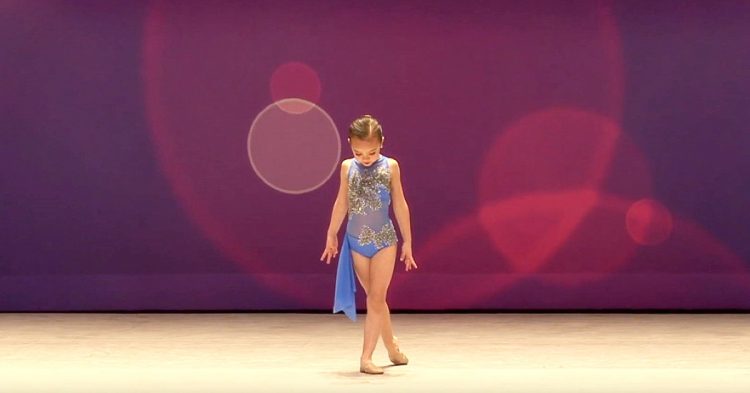 Although she may only be five-years-old, Jessica Sutton is a star! The young performer took to the dance floor as part of the Rainbow National Dance Competition in early 2020 and proceeded to blow away the audience and judges. Not only did Sutton place first overall, but she also managed to become a viral sensation after she blows off the top of the dance routine choreographed by Avianna Sanchez as part of Avi’s Dance Project.

After she is announced, Sutton hurries out to the center stage, where she takes her position. Before the music begins, her legs are crossed with the instep of her back foot pressed to the floor. She is wearing a blue one-piece with a fabric ribbon tied to her hip.

As the music begins, Sutton lifts her head and soon enters her first hold of the performance. She scoops her arm under her leg and lifts it straight up, so her toes are pointing to the sky. As she delivers this unflinching move, Sutton maintains a look of calm equanimity on her young face. Remember, this performer is only five-years-old and already so talented!

After nailing the first move, Sutton released her leg and falls to the floor for more dance moves. She quickly jumps into a tumbling routine that carries her a few feet toward stage left. She gracefully returns to standing and takes a flying pose with her arms outstretched on either side of her torso and her right leg pointing backward toward the wall behind her.

Sutton gracefully moves to the music and soon lifts her leg up to take another vertical split. Again she holds her leg up against her body as she twirls toward the front of the stage before doing a twirl with her leg in the air.

Just after the one-minute mark, Sutton goes into a full split. She then sweeps her legs back behind her and lifts her body with a push-up. The next stage of her routine focuses on movements performed on the floor. She shows that she has wonderful control over her body as she maneuvers her legs into challenging positions for a performer of any age.

As the performance draws toward its conclusion, Sutton does a twirl, a jump, and then another vertical split.

Throughout her winning performance, Sutton maintained a gracefulness rarely seen in children her age. You have to remember that this girl was just five-years-old when she was recorded performing for the Rainbow National Dance Competition.

When the performance ends, the audience erupts into applause as though they can sense that the young girl would be receiving high marks from the competition judges. Sutton is a determined young dancer who hopes to make a name for herself in the coming years.

What do you think about this little girl’s dance moves?