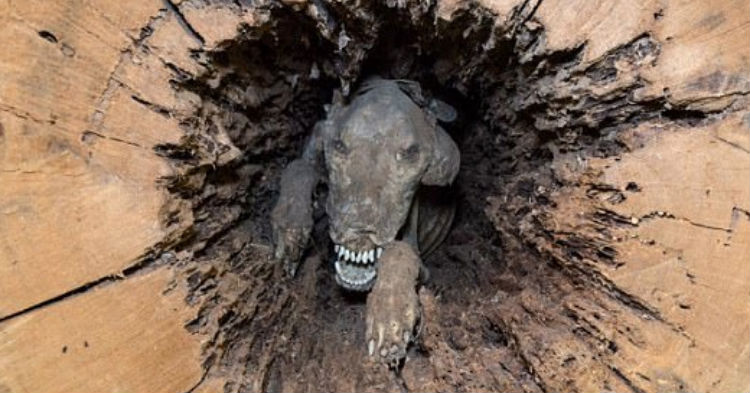 When loggers in Georgia were going about their job, they stopped short when they found a dog mummified inside of a tree trunk. The canine died doing what it loved, “chasing a raccoon.” And although the dog died more than twenty years ago, it has been entirely preserved. Now the dog is being named Stuckie. He had died chasing a raccoon into a hollowed oak tree and got stuck.

No one was able to find him, and his body slowly became mummified over the decades.

But now thousands of tourists are coming out to the tree to see Stuckie in all his glory. Although he died because no one could find him, now that the Georgia loggers have found him, he is a tourist attraction. And at the Waycross tree museum, Stuckie is the prime attraction.

Stuckie was found in 1980. Loggers from the Kraft Corporation were set to cut the oak tree into logs. But when they started getting to work, they found the dog mummified inside.

He was stuck near the top of the tree. And because of the strange occurrence, he is now the leading attraction at Forest World, which is a popular tree museum in the heart of Georgia.

Experts say that Stuckie’s body did not decay because an updraft of air carried the scent of his dead body about from the insects that would have eaten him.

Loggers could not send Stuckie’s section of the tree to the sawmill. Although they lost some money on it, they decided to donate it to the tree museum. And after a 2002 naming contest, the museum determined that his name would be Stuckie. Everyone agrees it is a fitting name for the mummified dog.

Stuckie managed to climb more than 28 feet up the tree trunk before he got stuck. They believe he was chasing a raccoon, but it could have been another small game.

Many people are still confused about how he mummified instead of rotting in the hollowed out oak tree. The museum sent out a press release to describe how it worked. Because a draft of air flew up the trunk, this chimney effect helped preserve the dog’s corpse.

Because he did not smell like a dead animal, his body did not attract the attention of the insects and usual suspects who feed on such things. The hollow tree trunk also protected him from the elements. Instead of being subjected to the humidity of the Georgia climate, he was in the comparatively dry space in the middle of the tree. This gave him more cover to help mummify his body.

With little moisture inside the tree, decay did not occur. That was furthered because of the presence of tannin, which is a substance that absorbs moisture. These factors worked together to protect Stuckie’s body from the inevitable decay of the dead.

Forest World’s Manager Brandy Stevenson admits people always ask how Stuckie got stuck. He says: “Well, he was a hound dog. Maybe he was after a raccoon.”

Visitors often say something like “Poor old thing. I feel so sorry for him.”