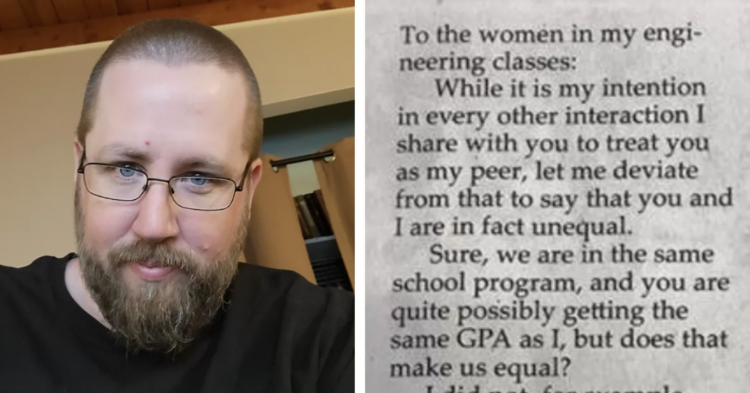 Anyone who studies or works in the STEM field knows that men outnumber women. Science, Technology, Engineering, and Mathematics have long been male-dominated fields – not because men are better at the topics than women – but because inequality has kept women away. Now, Jared Mauldin, a thirty-four-year-old engineering student at Eastern Washington University, has taken a stand against sexism by writing a letter explaining how the female students in his program are not equal to him and his male colleagues.

In his letter, Mauldin explains that he has seen some women throughout his time in school, but most of his classmates are of the male persuasion. That’s why he wanted to make it clear that all of the brave women seeking out careers in STEM fields “are in fact unequal” to their male counterparts because they have overcome so much during their adventures in education. 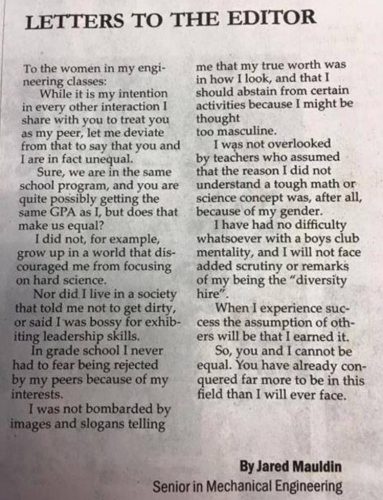 Male and female students are treated differently in America. While boys are encouraged to try math and science, girls are shooed away from the field and subjected to the softer sciences like psychology.

“I did not, for example, grow up in the world that discouraged me from focusing on hard science. Nor did I live in a society that told me not to get dirty or said I was bossy for exhibiting leadership skills,” he wrote.

Mauldin has come to see that he received advantages as a white man in America. Because of the way he looked, he was put on the fast track to success while people of color and women were given seats at the back of the bus. He wants more Americans to understand that sexism is real and that men are given more opportunities than women even though they don’t deserve the advantage.

“I was not bombarded by images and slogans telling me that my true worth was in how I look and that I should abstain from certain activities because I might be thought too masculine. I was not overlooked by teachers who assumed that the reason I did not understand a tough math or science concept was, after all, because of my gender,” he continued.

In conclusion of his viral letter, Mauldin congratulated all the women at his college for seeking out the career of their dreams despite the resistance from the greater American society. As women, they had to put themselves out there to seek success in the STEM industries and continued to face discrimination throughout their college careers.

“So, you and I cannot be equal. You have already conquered far more to be in this field than I will ever face.”

Mauldin may have written his letter to the editor, but it was quickly picked up online and became a viral sensation. Soon, people were sharing their reactions to his letter.

“Jared – I’m 59 years old, and I got my Ph.D. in physiology more than 30 years ago. Thank you for this. You have reduced this tough-minded old feminist to tears.”

“You nailed it, brother! Living under a microscope is not easy. Just having one male peer who ‘gets’ it and has my back makes a world of difference in my everyday work life.”

What do you think about his letter to the editor about sexism and equality?