Man Confesses His Parents Made Him Use A “Poop Knife” And He Thought Everyone Did Too : AWM 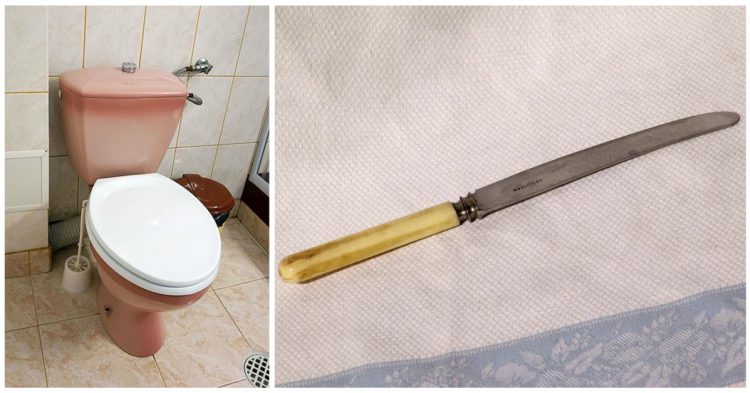 When growing up, one man never realized that his parents had a strange habit when it came to using the bathroom. Since they taught him how to use a “poop knife” since he was a young child, he thought that everyone was using the device just like him. However, since people don’t usually talk about what they do when they go to the bathroom, the man never had a reason to discuss his poop knife until he was shocked to find out that no one else in the world uses it as he does.

The Reddit user, LearnedButt, revealed his poop knife story on the social share website. Although he and his family had been wielding their poop knives all his life, he only learned that not everyone used one when he turned 22-years-old.

He decided to share his family’s obsession with going number two and why they all have their poop knives at the ready. And it has to do with exactly what you think it has to do with. But he leaves little to the imagination during his personal rant on the website.

“My family poops big. Maybe it’s genetic, maybe it’s our diet, but everyone births giant logs of crap. If anyone has laid a mega-poop, you know that sometimes it won’t flush. It lays across the hole in the bottom of the bowl, and the vortex of draining water merely gives it a spin as it mocks you.

“Growing up, this was a common enough occurrence that our family had a poop knife. It was an old rusty kitchen knife that hung on a nail in the laundry room, only to be used for that purpose. It was normal to walk through the hallway and have someone call out ‘hey, can you get me the poop knife?’”

Because this man was used to having his family clog the toilets – and plungers just didn’t do the trick – he would grab a poop knife from the kitchen cabinets and use it to jab at the turd blocking the pipes.

“I thought it was standard kit. You have your plunger, your toilet brush, and your poop knife. Fast forward to 22. It’s been a day or two between poops, and I’m over at my friend’s house. […] I excuse myself and lay a gigantic turd. I look down and see that it’s a sideways one, so I crack the door and call out for my friend. He arrives, and I ask him for his poop knife.”

It didn’t take long before he realized that his friend did not only not have a poop knife; he didn’t know what one was. But the man was in such denial about his poop knife that he did not believe the other guy didn’t have one. He thought he was just pulling his leg.

“Obviously he has one, but maybe he calls it by a more delicate name. A fecal cleaver? A Dung divider? A guano glaive? I explain what it is I want and why I want it. He starts giggling, then laughing. Then lots of people start laughing. It turns out, the music stopped, and everyone heard my pleas through the door. It also turns out that none of them had poop knives, it was just my f***ed up family with their f***ed up bowels. FML.”