Man Dives Head First Into A Hole To Catch A Beautiful, Rare Crab 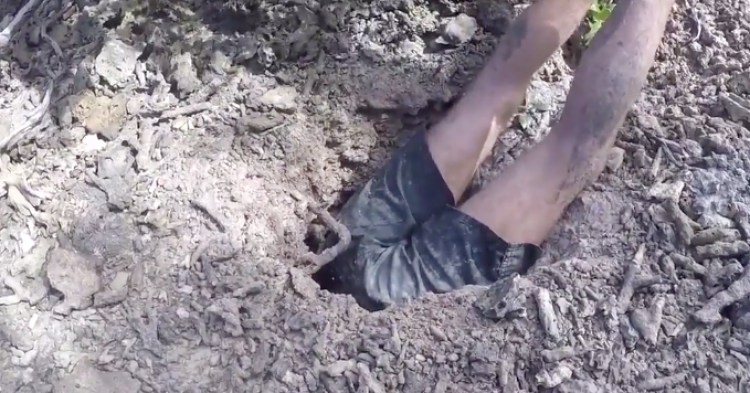 Australia has a reputation to uphold. And the wildfires may be tarnishing it. Because the country Down Under has been evolutionarily isolated for a long time, it has many unique animals and plants. This is why people are so upset upon seeing the thousands of animals dying as a result of the wildfire ravaging the Australian landscape. But this video today showcases a specific critter that isn’t anywhere near the wildfires because it dwells in the shallows along the shore.

This video features a wily man who is trying to capture something from its hole underground. The man behind the camera is trying to capture a wildlife enthusiast in the act of capturing a wild crab. But when you press play on the video below, you’ll quickly see that this is no ordinary crab. This crustacean is a beast unlike anything you’ve seen before – and you’re not likely to see one this size anywhere in the United States.

Because Beau Greaves makes his home in the Australian Outback in Queensland, he knows the importance of being close to nature. He needs to have his pulse on the land and the animals if he’s going to be able to live his life to the fullest – as he hopes to do each and every single day.

That’s why he wanted someone to film him reaching for the crab in this clip. It’s just not something that people get to do every day, and he wanted to provide a how-to video to show just how “easy” it is to snatch a crab from its underground hidey-hole.

Beau’s tactics are not subtle. He begins by grabbing a stick and shoving it down into the mudhole where the crab made its home. It’s actually quite aggressive and unkind if you think about it. What was the crab doing to him before he jabbed a battering ram into its home to get it out?

Because he thrust the stick into the crab’s home, the crustacean had to defend itself. This put it at a disadvantage because Beau knew what he was doing, and he was thinking a few steps ahead of the crab. He was ready to grab the animal as soon as it came into view.

Many people were shocked at the results of the video. Because Graves ends up climbing down into the crab hole to catch his prey, only his legs are visible when he’s down there. But the result was worth it for him. He didn’t mind getting dirty for this job.

Viewers of the content wrote dozens of comments about what Beau Graves did that day in Queensland, Australia.

“He’s so lucky that there are no leeches.”

Another person wrote, “I’m thinking it would have been awesome if Mr. Crab grabbed onto the guy and yanked him all the way into the hole.”

“My dad told me never go into holes without protection because you will catch crabs or worse. He just proved that fact,” one young man joked.

What is your reaction?