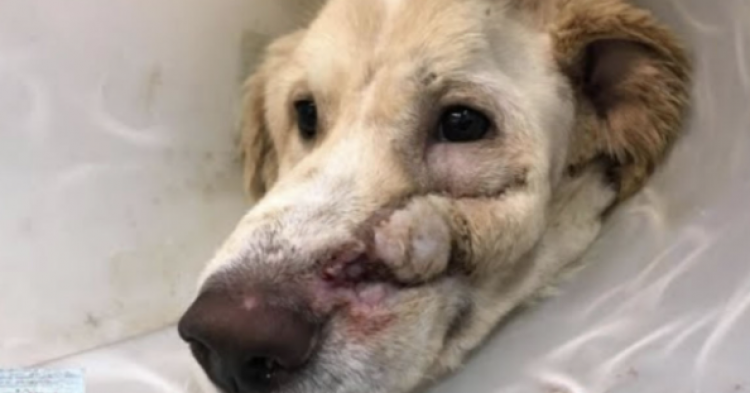 Millions of people choose dogs as pets because they bring so much joy into a household. However, one man decided to turn his gun on his seven-month-old pooch because the dog was “too happy,” and the man was bitter. The dog was shot in the face and left along a pathway in Greece, where the owner hoped it would die from the gunshot wound to the face.

The owner felt that the dog deserved a blast in the face because it was always “too happy” for his personal taste. He figured that he could use his shotgun to put an end to the happy dog and solve a “problem” that had been bothering him for months. Unfortunately, the dog owner decided to turn to violence against the animal as his method of solving the “problem.”

The Greek hikers found the dog, Ice, and rushed him over to the Good Samaritans at Save A Greek Stray, where he was given the medical treatment he needed. However, it was not clear whether or not Ice would be able to survive the gunshot to the face. Because the owner had shot the dog in the face, Ice needed a lot of medical attention if he was going to survive. Thankfully, the good people at Save A Greek Stray were able to give Ice the care he needed after the unfortunate attack by his owner.

The veterinarian quickly identified that Ice needed reconstructive surgery on his face. The wound from the shotgun blast was quite large and required immediate medical attention. Fortunately, those in charge of Save A Greek Stray were able to give Ice the attention he needed so his life could be saved.

Ice remained in the shelter for a long time following his surgery because he needed to recover. He was put up for adoption, but no one seemed interested in taking home the dog that had been horribly abused by his previous owner.

However, a year after the attack, Ice was finally adopted by a loving family. His new family lives in the United Kingdom, so they were able to take Ice from his previous home in Greece and bring him back into their home in the UK.

Now, Ice is living a happy and healthy life with his new family. He finally has the loving home he deserves after everything he’s been through.

It’s truly amazing how one dog can go from such a horrific situation to finding his forever home. Ice is a reminder of how resilient dogs can be, even after they’ve been through something as traumatic as being shot in the face. He’s also a reminder of how important it is to adopt dogs from shelters, even those who may have been through difficult situations in their previous homes. Ice was finally given a chance to have a happy life, and that’s thanks to his new family and the people at Save A Greek Stray.

We hope that Ice’s story has inspired you to adopt a dog from a shelter and to never give up on them, no matter what its past may be. Thank you for reading!