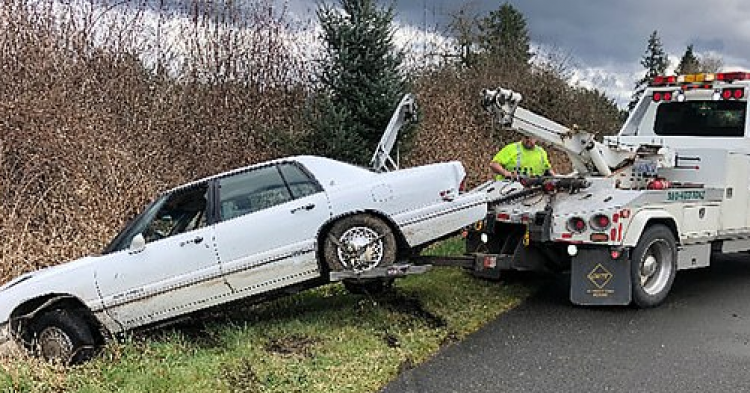 Because police officers are on the front lines of many different types of situations, they have seen a lot throughout their careers. But what happened in Seattle, Washington, after a high-speed car chase might have been a first for these experienced cops. After chasing down a vehicle that was traveling at speeds in excess of 100 miles per hour, the cops managed to use spikes to disable the speeding vehicle and then found a pit bull behind the wheel and a “confused” owner next to it.

While Washington State Troopers have seen a lot during their time on the force, these cops had never seen anything quite like this. The high-speed chase on Sunday ended in a surprising way when the pit bull was blamed for the speeding.

The animal’s owner, 51-year-old Alberto Tito Alejandro, claimed that he was trying to teach his pit bull to drive the car. When the pit bull started to get the hang of the skill, he quickly put the pedal to the metal and started running from the cops. While it is clear that no one believes that this story could have happened exactly as the dog owner claimed it did, State Trooper Heather Axtman relayed this information. You can bet she didn’t quite buy it.

Throughout the pursuit, troopers did watch some bizarre behavior. The pit bull did appear to be seated in the driver’s seat at some point during the high-speed pursuit. The dog owner, Alejandro, seemed to be pressing the gas pedal and steering from the passenger seat.

Because the pit bull was driving so fast, many people called 911 to report the incident. It is unclear if people who witnessed the car speeding past them at 100 miles per hour knew there was a pit bull behind the wheel or if they simply thought someone else was driving the car.

The car was eventually disabled by spikes put on the road. It was a 1996 Buick. When they approached the car, they did find the pit bull in the driver’s seat, as suggested.

“When we took him into custody… he admitted to our troopers that he was trying to teach his dog to drive,” Axtman said. “I’ve been a trooper for almost ten years, and I’ve had a lot of excuses when I’ve arrested people or pulled people over, but I’ve never had an excuse that the dog was driving.”

The pit bull who was speeding across Washington was not aggressive to arresting officers. The dog, which seemed to be an innocent bystander in all of this, has been placed into an animal shelter where it will hopefully be united with a loving forever family.

Hundreds of people shared comments about the speeding dog on Daily Mail. Here were a few.

“What kind of mind thinks that oh yea wait a minute, I’ll teach my dog to drive a car, and better yet let’s do it and idiotic speeds. Well done, America, another idiot on the loose.”

“This sounds reasonable since the dog has a larger IQ than the human.”

What is your reaction?