Man Places Sign On His Lawn, Not Knowing It Would Make National News A Few Days Later 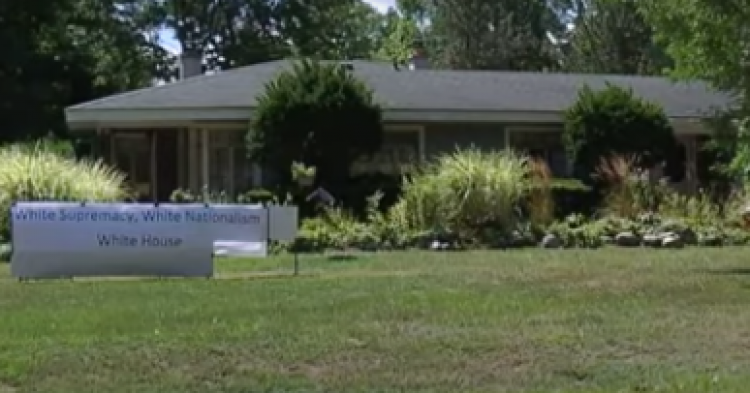 Although the freedom of speech is a guaranteed right for all Americans, according to the United States Constitution, the right is still a hotly contested topic. Because some people don’t want other people to speak their minds because it could cause civil unrest and mass riots, those who do put signs up to share their viewpoints can come across some heated haters. That’s why a homeowner in Livonia has sparked outrage from members of his community by posting a sign in his lawn that declared: “white supremacy, white nationalism, white house.”

Because the homeowner does not agree with President Trump and believes that Trump, the current occupant of the White House, is a closest white supremacist, he wanted to get people in the community thinking about the connection. That’s why this homeowner did not care that his sign could be seen as offensive to some people. In part, he was hoping that he would be able to rub some people the wrong way and get their heads spinning around what white supremacy really looks like in America today. 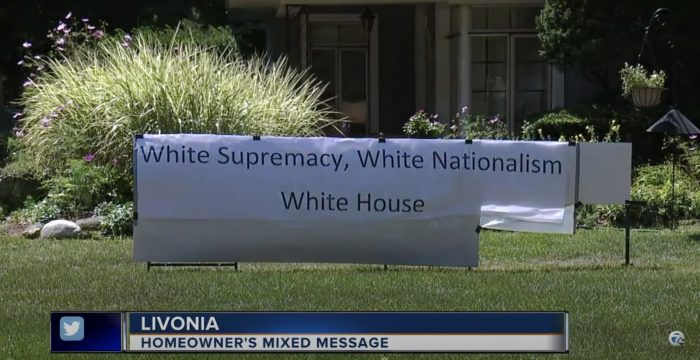 The sign called President Trump a white supremacist/white nationalist. Because the homeowner believes that America is best as a democracy that represents the country’s diverse array of citizens, he felt that it was appropriate to post signs that claim “Repeal and replace Trump” and “Prevent Truth Decay: Dump Trump” and “Children don’t belong in cages, Trump does!”

Although the homeowner knew that his signs would be controversial – especially since he lives in an area with a lot of Trump supporters – it is no surprise that people wanted him to take the signs down and stop expressing his freedom of speech.

“Not at all, not at all. Those two comments on top, basically, should have an equals sign that points to the White House.”

People who heard about this story on the news were quick to share their reactions in the YouTube comments. The following are just a sampling of what people have to say regarding this anti-Trump protestor and the signs he keeps posting on his property in an effort to persuade other people to vote blue.

“That guy said if trump gets re-elected, I gotta look at those signs another four years!”

“I can’t wait to tell one of Trump’s bodyguards associated Trump. It’s a day where the world will celebrate it will be the world’s biggest party in the history of the world.”

“I can’t wait until Trump wins again, these people are going to have mental breakdowns!”

Since white supremacy and Trump’s connection to it is a controversial topic, it goes without question why this man’s signs were sparking debate.

What do you think about his views on Trump?