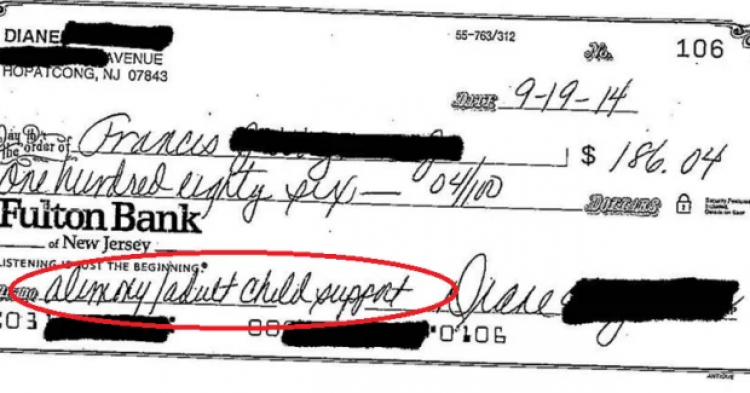 Every week when a New Jersey working woman has to follow the court order to write her ex-husband alimony checks, she always includes a demeaning message to let her former husband know that she doesn’t respect him. Now, the woman’s ex-husband is filing a lawsuit against her for writing “loser” and “bum” and other such messages in the memo line of her alimony checks, and the man hopes to make off with a big win if their case goes to court.

Sixty-one-year-old Francis J. Wagner Jr. of New Jersey wants his ex-wife to feel as much pain and suffering as he feels every week when he cashes her alimony checks. Because she uses the memo line to insult him, he claims that her abuses are causing him emotional and physical harm and that she owes him damages for the offense. Every week, Wagner’s ex-wife sends him alimony checks worth about $186 and a few cents.

Meanwhile, Wagner’s ex-wife doesn’t think her jabs are worth a lawsuit.

“As far as I’m concerned, I can write anything I want on the memo line because it’s a note to myself,” Diane Wagner, 57, told the Record. “I was the victim in that marriage. What more blood does he want from me? I pay him religiously.”

Throughout their ten years of marriage, Diane often suffered from Wagner’s drunken episodes. Because he was so unreliable, except when it came to the amount of his alcohol consumption, Diane filed for divorce and made sure she separated herself from him as much as possible.

Wagner Jr. accepts government handouts from Social Security and Disability Services and so could not afford a divorce trial. Because of his inability to come upon enough money, she was asked by the judge to pay him $744 per month in spousal support for the first six years after their marriage ended.

However, Diane’s life is not all roses. She is currently undergoing treatment for cancer and can barely afford her treatments – let alone Wagner’s alimony checks. Nevertheless, she continues to write checks to her ex-husband. She did file a request to reduce the amount she pays her ex-husband every month, but the request was denied by those in charge.

Someone representing her husband shared a photo of one alimony check to the Trautmann & Trautmann law firm’s Facebook page.

“Alimony for the man!” the caption read, next to a photo of one of Diane’s checks. “What’s funny is that the now ex-wife so hated paying our client — the husband — $800 per month for the next six years as alimony, and she had written Alimony/Adult Child Support in the memo of the weekly checks — until we put a stop to that harassment.”

Diane told the Record, “When I found out my personal business was on the Facebook page, that caused me distress.”

The law firm then sent her a cease and desist letter that said, “Please be advised that your writings are causing my client severe emotional distress and have led to him having sustained heart attacks in recent weeks.”

Do you think this ex-wife should be allowed to write “loser” in the memo line for her ex-husband’s alimony checks?