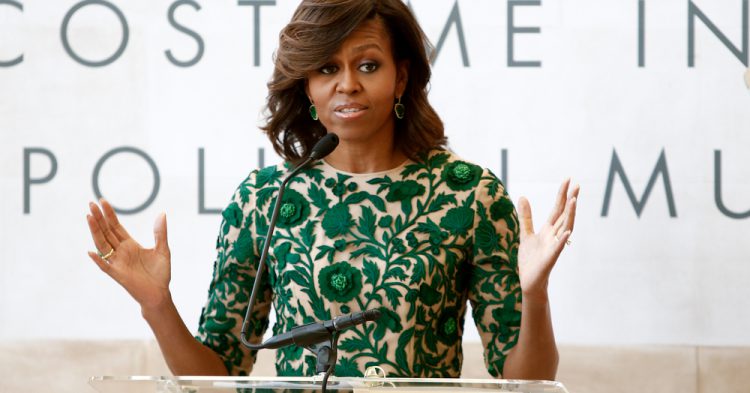 Although Michelle Obama’s memoir, Becoming, has only been out for about a year, it is also among the bestselling books of its class ever. People are bonkers for Becoming and continue to buy copies, keeping it on the bestsellers list despite it already being out for a while. Now that Obama has racked up the sales, it is time for the awards to come rolling in, and now her 2018 memoir has been nominated for a Grammy Award.

This is the year of Michelle Obama. In July, she was crowned the title of being the World’s Most Admired Woman and now has her book in the running for the Spoken Word category of the Grammy Awards coming up next year.

Obama received the Grammy nomination as part of her audiobook version of the memoir. While she is not guaranteed victory – she is up against some stiff competition, including other nominees like the Beastie Boys, actor-director John Waters, poet Sekou Andres, and musician Eric Alexandrakis – she certainly has a leg up being so well admired and the former first lady of our nation.

If Michelle Obama wins the Grammy for Spoken Word, she would not be the first person in her family to do so. Her husband, Barack Obama, previously won the award twice in 2006 and 2008. There have also been other former presidents who also took home the prize, including Jimmy Carter and Bill Clinton. They share three wins between the two of them in the same category. If Michelle Obama wins the Grammy award, she’ll be joining a prestigious company.

Bill Clinton won the Grammy for Best Spoken Word Album in 2005. But he couldn’t beat out his wife in the award. Hillary won the category back in 1997 and was nominated again in 2004. But she lost to now-shamed former politician Al Franken.

Michelle Obama has been nominated for this award previously. In 2012, the audiobook version of her last book, Garden Grown, was nominated, but it did not take home the top prize. This time, her book is expected to win, although it is not guaranteed (nothing in life ever is).

As millions read in her memoir, Michelle Obama went from an average life in Chicago to graduating from Harvard and becoming a high-powered attorney. She mentored Barack Obama when he first came into the law profession, and they hit it off rather quickly and have not looked back ever since.

During this year’s Grammy celebration, Michelle Obama graced the stage along with the hosts Alicia Keys, Lady Gaga, Jada Pinkett Smith, and Jennifer Lopez – showing off a number of powerful and successful women all at once. During her appearance, Obama spoke about the impact of music on her life.

“From the Motown records I wore out on the Southside, to the ‘Who Run the World’ songs that fueled me through this last decade, music has always helped me tell my story,” she told the roaring crowd.