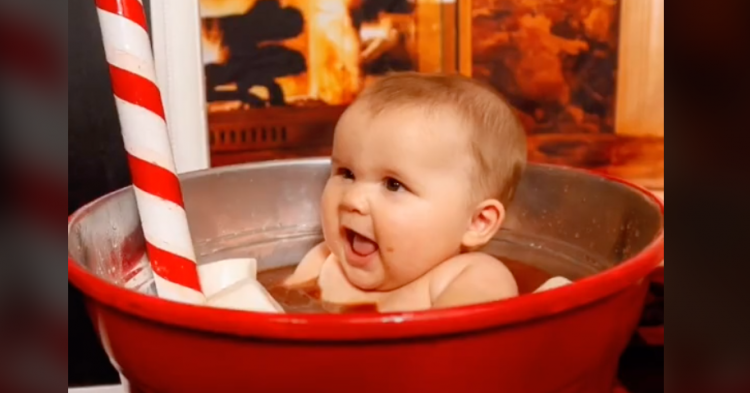 Mom came up with a creative way to photograph her infant for Christmas. Instead of putting the baby in a festive hat or getting the baby to sit on Santa Claus’s lap, mom figured she would do something no one has ever done before. Now, mom and TikTok user, Ashlie, who posts content on the Chinese-created social media platform under her account, @LilAshiwee, has shared something that has received millions of views and thousands of comments – more than 4,000 at the last count – because people are in love with how she put her baby in a flower pot filled with hot chocolate.

By sharing images and clips from her “hot chocolate” photoshoot online, Ashlie was able to stir the pot and get a lot of people talking about her Christmas activities. In the now-viral video, Ashlie has placed her baby, who is just six months old, into a flower pot filled to the brim with hot chocolate and marshmallows. The baby grabs the large marshmallows and takes bites of them throughout the adorable clip and images, which made people fall in love with the Christmas display.

So many people fell in love with Ashlie’s photoshoot. They asked for more information. The busy mom followed up her first video with a second to explain how she did it. She described how the big “mug” was actually a flower pot that she painted red. She plugged the holes at the bottom to ensure that no hot cocoa escaped while her baby was inside it enjoying easy access to the sweets.

Ashlie got creative when making the peppermint stirrer. She explained that it was crafted from a PVC pipe and painted to look like a large stick of peppermint. Meanwhile, the giant marshmallows were genuine marshmallows that she had purchased from Kroger’s, the grocery store chain. Mom explained that while her photoshoot idea was very cute, it required constant supervision to ensure that the baby did not accidentally choke on the large marshmallows.

TikTok users showered the Christmas idea with compliments and applause. Many people explained just how adorable they found the photoshoot to be in the comments they left on the video.

“[This] honestly made my day!” added another user, heart emojis in tow.

“*saves for when I have a baby in five years*,” one user joked.

“This is the most creative thing I’ve ever seen! HE IS SO STINKING CUTE!” another user exclaimed.

The photoshoot was so popular. It even made its way to Twitter. Actress and talk show host Ayesha Curry retweeted the video while adding her own thoughts on how cute she found the idea to be.

“So much cuteness!! I want a bathtub full of hot chocolate now!” wrote actress Yvette Nicole Brown, sharing the video to her Twitter account.

Even celebrities are falling in love with this photoshoot idea! Actress and singer Lea Michele shared an image of Ashlie’s baby enjoying the hot chocolate on Instagram while adding that she was “obsessed” with it.

Ashlie has no plans for slowing down any time soon. She spends much of her free time on TikTok, sharing hilarious videos and images with the world.